Review - - Written in the Stars 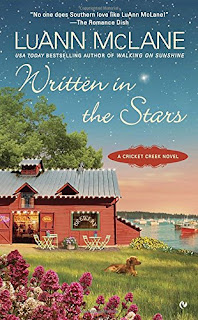 Cosmopolitan Grace Gordon, half British/half American, has just sold her cosmetics company at a hefty profit and is at loose ends while she decides what’s next for her. It’s the perfect time to visit family in tiny Cricket Creek, Kentucky. Her brother Garret Ruleman and his wife Mattie Mayfield (Walking on Sunshine) are in town awaiting the birth of their first child, Grace’s twin Sophia has taken leave from her job as stylist for the rich and famous to help in Mattie’s bistro, and their mother Becca, a former supermodel and current successful clothing designer, will be arriving soon. Grace plans to enjoy her family, celebrate the arrival of the new family member, and consider her options for the future. She doesn’t plan to get lost, be forced to shelter in the bathroom of a craft brewery during a tornado warning, or fall in lust at first sight with Mason Mayfield, owner of the brewery and brother of her sister-in-law Mattie.

Mason once had dreams of being a big name in professional fishing. He also had a fiancée who anticipated life as a celebrity wife with all its perks. When his father’s illness led him to surrender the dream and return to Cricket Creek to help save the family marina, his fiancée dumped him. The marina is solvent again, and Mason is invested in a new dream that is on the cusp of being realized: a craft brewery that offers unique beers. Grace definitely has him thinking about more than beer, but Mason is wary of getting involved because of his romantic history and the family connection and because Grace’s stay in Cricket Creek is strictly temporary.

The attraction proves strong enough to persuade them to ignore their reservations and see where a relationship leads. When delays mean that Mason needs an investor for his brewery, Grace volunteers to become a partner, providing her marketing expertise as well as a cash influx. However, the differences in this country boy and city girl complicate matters. Mason particularly objects to Grace’s plan to target women with clever names and an ad campaign for his beers. Mason and Grace may share a love of country music, but they have to resolve some very real problems if they are to continue with their love duet.

This is the ninth book in McLane’s Cricket Creek series, and it is the same kind of sweet small-town romance as the other books. Admittedly a lot of famous people seem to show up in the tiny town, but it’s such a fun place to visit that I for one am not reluctant to willingly suspend disbelief. The chemistry between Grace and Mason strikes the reader as real. They are both appealing characters, and, despite their different backgrounds and personalities, they have basic values in common as well as an appreciation of one another’s differences. It is easy to envision them as an HEA couple.

McLane usually includes a secondary romance involving an older couple. This time it involves Grace’s mother and a man who lived Mason’s original dream. I found their relationship humorous and delightful, so much so in fact that I wished for more of it. As a reader who has enjoyed other books in the series, I was pleased to see characters from earlier novels integrated into the story. And I loved the families’ reaction to wee Lily.

If you are a fan of small-town romance where the natives speak with a Southern accent, the charm is as potent as the perfume of star jasmine, and the romances end in sigh-worthy HEAs, you should add Written in the Stars to your TBR list. I’ve already added book #10, Wish Upon a Wedding (May 3, 2016), Sophia’s story to my list.