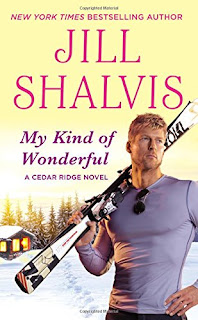 UNEXPECTED AND UNDENIABLE . . .Bailey Moore has an agenda: skiing in the Rockies, exploring castles in Europe, ballroom dancing in Argentina. Now that she has a second lease on life, she's determined not to miss a thing. What she doesn't realize is that item #1 comes with a six-foot-one ski god hot enough to melt a polar ice cap. She doesn't want to miss out on him either, but Hudson Kincaid isn't the type of guy to love and let go. And as gorgeous as Cedar Ridge is, she's not planning to stick around.

As head of ski patrol at his family's resort, Hud thinks he's seen it all. But never has he run into someone like Bailey. She might look delicate, but her attitude is all firecracker. And her infectious joy touches something deep within him that he's been missing far too long. Now he'll just have to convince Bailey to take a chance on her biggest adventure yet . . . something rare and all kinds of wonderful.

Cedar Ridge is fast becoming my favorite Jill Shalvis series. Set high in the Colorado Rockies, the series centers around the lives of the Kincaid siblings and the ski resort they run. Their lives have not been easy; three of the siblings are the results of extra-marital affairs their father had before he skipped town leaving all of them in a financial stranglehold and working day and night to save their beloved resort.

Hud Kincaid, along with his twin brother, spent his childhood taking care of his mother and staying one step ahead of child protective services. The day he arrived in Cedar Ridge and met his legitimate half-siblings - and their caring mother - was the day he finally found a home. He loves his work as head of ski patrol at their resort, his part-time job as a police officer, and his family. He never wants to leave. He does his share of dating but is content to leave relationships to his family. Hud has some deep issues with putting his heart in another's keeping. His father abandoned them, his twin brother left town when they were eighteen and he hasn't heard from him since, and the mother who neglected them is now in a care facility and his responsibility. Hud's roots are sunk deep in Cedar Ridge. He shoulders too many responsibilities to even think about taking a day off, much less leaving town, but Bailey Moore is a whirlwind he never sees coming...and exactly what he needs.

Bailey has spent the past ten years on the cusp of death, cocooned in cotton by her mother and ex-fiance. She never expected to be alive at this stage of her life, much less cancer-free and she plans to make the most of each and every day. She has a list, written in her darkest days, of all she wants to do. Skiing in the Rockies is on the list. So is painting a mural and traveling the world. Falling in love with Hud is not but sometimes fate gives us what we most need, even if we don't know it.

My Kind of Wonderful is one of my favorite contemporary romances of this year. Filled with Shalvis's trademark humor, sass and sizzle, it also has an emotional depth that touched every emotion. Shalvis has brought these characters - the entire Kincaid family - to life in such a way that I'm sure if I traveled to Cedar Ridge - also brought to vivid life in these books - that they would all be there waiting to welcome me.

If you're looking for a story that makes you laugh, cry, and cheer for the love, light, and family that triumphs over adversity, look no further than Jill Shalvis's My Kind of Wonderful.


In My Kind of Wonderful, Bailey paints a mural at the Kincaid's ski resort, depicting each family member with a caricature that shows them at work or play, doing what they love most. How would you be depicted if someone painted a caricature of you?

When the knock came at the door, Hudson had just gotten out of the shower. Wrapping a towel around his hips, he grabbed the money he’d left on the foyer entry table and pulled open the front door.
But it wasn’t the pizza guy.
Instead, Bailey stood there. She lifted her head slowly, her gaze taking in his body.
Her mouth fell open.
He let out a rough laugh and gripped the doorjamb at either side of him to stop himself from reaching for her. “You can’t look at me like that and tell me nothing’s happening between us.”
“Yeah, and while we’re on the subject…” She lifted her gaze to his and blushed. “I might have been…hasty in some of the things I said last time I saw you. That’s why I’m here. I came to retract part of it.”
He stilled. Or most of him did. One particular appendage did the opposite of being still. “Which part?”
She swallowed hard and stepped into him, setting her hands on his stomach. Head bent, she stared at her fingers on his bared skin, her brow furrowed in concentration.
Up or down, babe. Either way works, but I pick down…
“I don’t know how to say this, that’s all.”
“Just say it,” he said quietly. “You can say anything to me, anything at all.”
“Okay,” she said. “I’m having trouble finding words because I’ve never done this before.”  She drew in a deep breath. “What I’m trying to say is that I want a one-night stand.” She met his gaze, clearly waiting for his reaction.
He opened his mouth and then closed it again.
“With you,” she said. “In case I wasn’t clear. I want you.”
“For tonight,” he clarified.
“Yes.”
Just one night? Ignoring the unmistakable flash of disappointment—what the hell was that about?—he pulled her inside, kicked his door shut, and gently pushed her up against the wood and cupped her face. “You need to be sure.”
“I am.” She blinked. “Are you? Because it’s okay if you’re not. I can find someone else. I can make a list.”
This stopped him. She could make a list? Of who? Not important, he told himself. Shake it off. “You’re not going to need a list for this, Bailey.”
She stared at him. “No?”
Hell no. “I already told you that I want you. Now I’m going to show you.” He gave her a few beats to absorb that before he leaned in and kissed her, putting every ounce of his want and need into it. In answer, she moaned and wound her arms around him.
Without breaking the kiss, he straightened and cupped the backs of her thighs, encouraging her to wrap her legs around his waist.
And then he carried her to his suite. 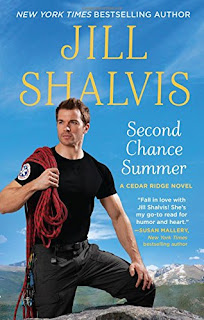 Start from the beginning with book one in the Cedar Ridge series, SECOND CHANCE SUMMER! (Read PJ's review here)

Cedar Ridge, Colorado, is famous for crisp mountain air, clear blue skies, and pine-scented breezes. And it's the last place Lily Danville wants to be. But she needs a job, and there's an opening at the hottest resort in her hometown. What has her concerned is the other hot property in Cedar Ridge: Aidan Kincaid—firefighter, rescue worker, and heartbreaker. She never could resist that devastating smile . . .

The Kincaid brothers are as rough and rugged as the Rocky Mountains they call home. Aidan has always done things his own way, by his own rules. And never has he regretted anything more than letting Lily walk out of his life ten years ago. If anyone has ever been in need of rescuing, she has. What she needs more than anything are long hikes, slow dances, and sizzling kisses. But that can only happen if he can get her to give Cedar Ridge-and this bad boy-a second chance . . . 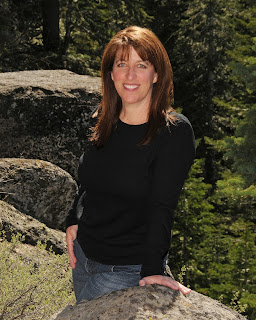 New York Times bestselling author Jill Shalvis lives in a small town in the Sierras full of quirky characters. Any resemblance to the quirky characters in her books is mostly coincidental. Look for Jill's bestselling, award-winning books wherever romances are sold and visit her website for a complete book list and daily blog detailing her city-girl-living-in-the-mountains adventures.

Posted by pjpuppymom at 8:33 AM