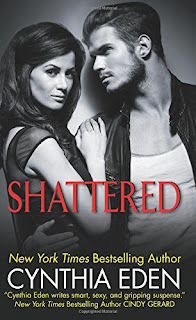 Part of the LOST series, Shattered is the third in a fast-paced, suspenseful series, featuring members of a group who searches for missing people, preferably before they turn up dead. Dr. Sarah Jacobs is a criminal psychiatrist whose skill lies in profiling, her ability to think like a killer. She should know; she learned from the best: her father. Jax Fontaine is an anti-hero who is loyal only to his own code, but is drawn to Sarah with a force he cannot deny. Jax first strives to have his past be a new case for the LOST team work on, in a bid to keep close to Sarah, whom he has bedded and isn’t yet ready to part. However, he soon becomes Sarah’s one man protection team because someone is out to kill her—and that someone has the same MO as the first monster she put away, her father. It soon becomes clear that whoever is out to get Sarah is determined to make Jax look like the killer.

Although this is part of a series, it can be read as a stand-alone—I did. The author’s voice is compelling, strong, and sexy; and the pace travels at the speed of light. If romantic suspense and alpha anti-heroes are your go-to romance of choice, you can’t go wrong with this. It reminds me a little of J. R. Ward’s Brotherhood series in tone, sex, and heroes. If you prefer lighter, more romantic anti-hero types (say like Lisa Kleypas), this book may be too dark for you. I found it a bit violent for my tastes, however, I think for the right audience, this is a keeper.