Review - - A Chance of a Lifetime

A Chance of a Lifetime
By Marilyn Pappano
Publisher: Forever
Release Date: December 22, 2015 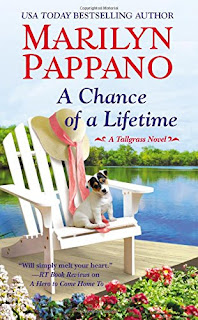 Benita “Bennie” Ford is not yet thirty, but she has already experienced a great deal of loss in her life. Abandoned by her mother, Bennie was still a child when her father died. She was blessed to have several extended family members who were eager to give her a home, but her grandmother, Mama Maudene Pickering, insisted Bennie’s place was with her. So nine-year-old Bennie moved to Tallgrass, Oklahoma, where she soon acquired two new best friends, J’Myel Ford and Calvin Sweet. The boys had been best buds for years, but they were happy to turn their duo into a trio. And a trio they remained until they graduated from high school and J’Myel and Calvin enlisted in the army. Later Bennie and J’Myel fell in love and married, and J’Myel and Calvin fell out. Bennie never knew what happened between them, but she knew her greater loyalty was to her husband.  Calvin ceased to be part of her life. J’Myel was one of the soldiers who never came home, and Calvin failed to show up for his funeral. Bennie is not sure she can forgive him for that.

Calvin did return to Tallgrass, but the man who came home is not the idealistic boy who left. He may not be missing a limb or carry the traumatic brain injury designation that many of his comrades do, but he is among the wounded, burdened with PTSD and a case of survivor’s guilt so deep and encompassing that his life seems worthless. In a moment of overwhelming despair, he tries to end it. He survived that experience too, and after eleven years, he is home. But once he is released from the hospital and from the Warrior Transition Unit, his life as soldier will be over.  He just doesn’t know what he is going to do with the life he knows he should be grateful to have. The fact that he can’t seem to feel grateful is just one more reason to feel guilty.

Bennie has been a widow for three years, and she has gone on with her life, thanks in large part to her sisters in the Tuesday Night Margarita Club (also known as the Widows Club), her tight community, and her tenacious, faith-filled, loving grandmother. That same grandmother is not beyond manipulating matters to see that Bennie and Calvin renew their friendship, ably assisted by Calvin’s grandmother and assorted Pickering and Sweet relatives. Neither Bennie nor Calvin can deny that their shared memories have forged a bond that has survived the years of silence, and as they spend time together, a strong attraction develops as well. But can Bennie understand what happened that night in the park when Calvin had a gun in his hand and no will to continue a life that seemed unbearable?

This is the fifth novel in Pappano’s Tallgrass series, and once again she gives her readers a compelling story that packs a powerful emotional punch. Bennie and Calvin are characters whom readers will take to their hearts. Wounded warriors have become standard fare in romance fiction in recent years, but for my money, Pappano’s series is the gold standard in this subgenre. Her characters show all the ways war inflicts devastating wounds on those who survive and on the families whose loved ones do not survive. She also shows the many faces of grief and varied paths to recovery, recovery empowered by love romantic and familial and by friendship.

In some ways, this is the darkest of the Tallgrass books, and Calvin’s suicide attempt may be a trigger for some readers. However, Bennie and Calvin have their light moments as well, and a particularly vivid cast of secondary characters also provides balance. The two grandmothers are scene stealers who are funny and endearing, and the troubled youngster who saves Calvin’s life adds humor and poignancy. Fans of the series will be happy to see members of the Tuesday Night Margarita Club play their usual roles. I am sure that other readers will share my delight in the secondary plot that pairs Lucy Hart, another of the Margarita girls, with Joe Cadore, her hunky coach neighbor (at last!). I hope we see more of these two.

If you have read any of the Tallgrass books, you know they are exceptional. This may be the best of an excellent series. If you have not read any of the series and like contemporary romance that is authentic and unforgettable, this one can serve as your introduction. I highly recommend it. You may want to go ahead and add book 6 to your list. A Summer to Remember, Fia Thomas’s story, will be released June 28, 2016.