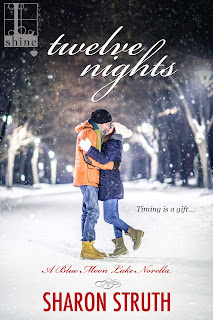 Beryl Foster has built one successful career. After fifteen years with Global Business Solutions, she has become the company’s chief financial officer with an enviable salary and a reputation to match. She has also achieved success in her second career as Katherine Carrington, romance author. Because she fears being known as a romance author would mean being taken less seriously in her day job, only her late father was aware of Beryl’s second identity. However, she takes pride in both her careers. When her boss and mentor GBS announces his retirement, Beryl knows there is a chance that his successor will come from outside the company and will bring his own team, leaving Beryl and other top executives to update their résumés and get the word out to head hunters that they are looking for another position. Even so, she is taken by surprise when her boss names a former GBS employee, Erik Lindholm, to succeed him.

Erik Lindholm is elated to be named the new president of GBS. He is exactly where he planned to be, but he had not expected to find Beryl still with the company. He has practically promised the CFO position to a colleague at his former company. If he fires her, will Beryl see his action as retaliation for her refusing to move to London with him when he left GBS fifteen years ago for the promise of faster advancement? That question acquires new urgency when an accident propels him into Beryl’s personal orbit as well as her professional one.

It doesn’t take long for the feelings Beryl and Erik once shared to reawaken, but career conflicts are still a problem. In fact, they may be more of a problem now since a romantic connection between executives is a violation of company ethics. On the other hand, if Erik fires Beryl, they will be free to date. But will Beryl want to date the man who fired her? Have Beryl and Erik been given a second chance at love or a second time to watch love take second place to their careers?

The reunion trope is my favorite, and Struth gives it a different twist in this tale that combines high pressure, sophisticated living in Manhattan’s corporate world with the warmth and memories of small-town life that still have a place in Beryl’s heart. Beryl and Erik are likeable characters, and I found both the choices that separated them and their different responses a decade and a half later believable. The Christmas season, particularly given the romantic memory of this couple’s first Christmas together, was a sweet touch without becoming saccharine. If you are looking for a Christmas story that is a bit different from the norm, I recommend this novella. Although it is part of Struth’s Blue Moon Lakes series, it can easily be read without having read the earlier book in the series. However, the novella did persuade me to download Share the Moon (Blue Moon Lakes Book 1).

I was disappointed in the ending because I felt that it conformed to gender stereotypes after holding out the promise of an egalitarian relationship. The 3.5 stars reflect that disappointment. Doubtless many readers will think me too doctrinaire and will find the conclusion eminently sigh-worthy.