Review - - Alone in the Dark


Alone in the Dark 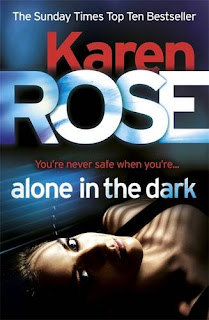 With a network of villains who will stop at nothing to maintain their power and a determined couple on their trail, the latest in Karen Rose’s Cincinnati based romantic suspense novels is just the thing to curl up with over a long winter weekend.

We first met hero, Army Ranger turned publisher Marcus O’Bannion, in last year’s Closer Than You Think, and the events of that book still haunt him months later—especially the injuries he suffered saving two kidnap victims. And true to form, he begins this book attempting to save another victim, one who unfortunately is killed before he can do so. It’s that murder that brings him back into contact with the beautiful Cincinnati PD detective, Scarlett Bishop, who has haunted him since she visited him at his bedside after he was shot.

Scarlett knows that she’s attracted to the handsome newspaperman with a penchant for rescuing people, but despite her hope that his presence at the murder scene was as innocent as he claims, she’s not quite sure she’s ready to trust him. Not to mention the fact that he wore a bullet proof vest to a meeting with a teenage girl, there’s the fact that he recorded the entire encounter with a mini video camera. Is he just after a great story, or was his presence there simply an attempt to help a young woman in trouble as he claimed. She knows what she wants to believe, but her boss and her cop instincts tell her to be wary.

What unfolds is a high-octane, complicated, romantic, angry-making thriller that kept me turning the pages long after my bedtime had passed. Though I expect a strong mystery plot with a Karen Rose novel, over the past several books these have become “bigger” both in scope and in complexity. And Alone in the Dark is no exception. Along with this super-sized plot comes a higher body count, which at times is even a bit too much for this thriller lover. Even so, Rose makes me care about even the most disposable of secondary characters, and even when that little voice in my head is telling me this couldn’t possibly happen in real life, I’m riveted to the page and telling that little voice to shut up so I can finish the story.

As I’ve come to appreciate about her work, Rose doesn’t stint in the romance department, even when there’s so much more page count needed to unravel the mystery. There was so much exquisite angst between Scarlett and Marcus—they’d pined for one another for months before they saw each other again—and that made their admission of their feelings, and the consummation of them, that much sweeter. I’m a big fan of the “hero and heroine work together to meet a goal” trope and Karen Rose always delivers on that. And even when they’re running for their lives or arguing about which approach to take when confronting the bad guys, there’s never any doubt that these two are meant for each other.

Any series reader will tell you that as soon as they finish one book, they’re wondering whose book comes next, and with this one there are a number of options. It could be Marcus’s brother Stone and the Animal Shelter Director who was also injured by the previous villain. Or perhaps it will be Dani, the sister of Scarlett’s partner Deacon, coupled up with Marcus’s right-hand-man, who has a gruff exterior and a troubled past. All I know is I want that book in my hand.
Right. Thrilling. Now.

Manda Collins writes smart, sexy historical romance laced with a touch of mystery. Her most recent book, Good Earl Gone Bad, second in her The Lords of Anarchy series was released in October, 2015 and the next, Good Dukes Wear Black will be released in April, 2016. You can find more information about Manda and her books at her website and connect with her online at Facebook and Twitter.