Review - - Some Kind of Wonderful 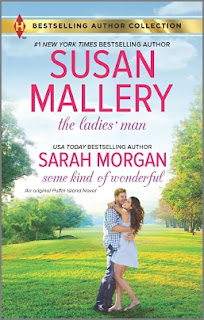 Having broken her wrist on a dig, archaeologist Brittany Forrest is returning to Puffin Island, Maine, and Castaway Cottage, the home she inherited from her grandmother. Thanks to her friend, fellow archaeologist, and former roommate, Lily Rose, and Lily’s fiancé, Greek tycoon Nik Zervakis, she is arriving not by ferry but by a Cessna seaplane. Brittany is delighted with Nik’s generosity that will allow her to avoid the crowed ferry—until she sees the pilot: “Dark glasses shielded his eyes, but she felt a jolt of instant recognition followed by a strange flutter in her stomach and an alarming shake of her knees. It had been ten years, but she would have known him anywhere.”

Zach Flynn was an abused, unwanted child who belonged nowhere and to no one. He grew into an angry twelve-year-old already on the path to disaster and self-destruction until an astute, sensitive camp director introduced him to the wonder of flying. It enlarged Zach’s world, gave his life purpose, and, perhaps most importantly, gave him something to love. “On the ground his life was a dead end with no way out, but in the air he saw more than sunshine and fluffy clouds beyond the horizon, He saw a world without limits, full of possibilities. He saw hope.” But even flying cannot heal the damaged soul that is Zach Flynn.

Ten years earlier, an eighteen-year-old Brittany fell in love with bad-boy Zach. Certain that she could “tame the wild in him,” she married him. Ten days later he left her, leaving her with a shattered heart, memories she struggles to suppress, and eventually a determination to get over him and get on with her life. She did well with that last item, but the sight of Zach is enough to tell her that she is not as indifferent to him as she would like to believe. The chemistry is definitely mutual, but Zach is as convinced as he was ten years ago that he is bad for Brittany no matter how strong the attraction between them may be. When they end up involved again, he warns her:

"That just shows you don't know as much about women as you think you do,
because no smart woman would turn her back on sex this good."

Despite everything, she made him smile.

But Zach is still terrified of emotional intimacy, and without trust, they can have no future.

Some Kind of Wonderful is the second book in Morgan’s Puffin Island series. I loved First Time in Forever, book one in the series, and I think this one is even better. I confess that I’m partial to the reunited lovers trope. When it is done well, it is my favorite, and in this book, Morgan offers a near perfect second chance story. First, Brittany and Zach are both interesting characters on their own. In the decade since they parted, they have both grown into adults with careers that matter to them and a romantic history. No one has spent ten years sighing and pining for what might have been, but they bear scars from their shared past. Second, the chemistry between them remains powerful, and its very power is part of the conflict: “There was nothing civilized about the chemistry between them. Never had been. Being with Zach had been the most dizzying and exciting time of her life. Until he’d dumped her.” Finally, the ongoing conflict is real; no contrived Big Misunderstanding that could have been resolved in one conversation here. Zach is still damaged from his childhood, and Brittany can’t change him. He himself has to see the need and the possibility of change.

I often say that I like my romances rich in context, and Morgan satisfies on that level as well. Brittany’s memories of her grandmother and the tight friendship between her and Emily Donovan and Skylar Tempest, her college roommates, add depth to Brittany’s character and to the story. So too does Zach’s relationship with Philip Law, the man who taught him to fly, and to Ryan Cooper. The latter is especially interesting because of Ryan’s double loyalties to Zach and to Brittany. Puffin Island seems real too with its physical features delineated and its community portrayed with its strengths and its imperfections.

I put this book on my TBB list as soon as I read the first book, but even though the U. K. print version was published last summer, the digital version is only recently available, and it seems that a solo print version will not be available until 2017. Skylar and Alec’s story, Christmas Ever After (which has me almost hyperventilating I am so eager to read it) was available in print in the U. K. last October, but I don’t know when it will be available here. I highly recommend Some Kind of Wonderful. Just remember that in the U. S., it is only available in a duet pub with a reissue of Susan Mallery’s The Ladies Man (2006).