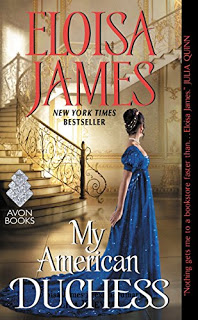 One definition of “enchanting” is “to delight to a high degree,” and that is certainly an apt description of the five fairytale novels (A Kiss at Midnight, Beauty Tamed the Beast, The Duke Is Mine, The Ugly Duchess, and Once Upon a Tower) of Eloisa James and of her upcoming release, My American Duchess. Now don’t get me wrong. I’m definitely a fan of James’s series. I have a designated keeper shelf filled with those series, many of them signed by the author. I am gradually filling my Kindle with digital copies. In fact, I have four copies of my #1 EJ book, Pleasure for Pleasure—an ARC (my first) with a slightly plumper Josie on the cover, a print copy in English, a print copy in French, and a digital copy. And I’m loving the second-generation Duchesses books, not least because Villiers appears in them all. Still, there is something special about the standalones that invite the reader into a world that is wonderfully complete within slightly under four hundred pages. 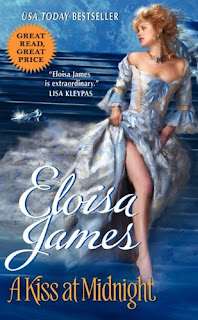 A Kiss at Midnight (2010) is my favorite of the fairytale romances because it is true to the original with just enough twists to keep it fresh and feminist. EJ’s Cinderella, Kate Daltry, is no patient, submissive Griselda, and she’s no saintly, suffering Disney Cinderella either. In the first chapter the reader sees her as an angry, embattled heroine, who has been the protector of servants and tenants since her father’s death. In fact, it is this concern that gives her stepmother a means of forcing Kate to do her bidding rather than this Cinderella meekly submitting to villainous authority. I loved Kate. From the fierce protector of chapter one to the drowsy princess of the final chapter, she is fully human and wholly enchanting. The prince of this story prince is no closer to the traditional fairytale prince than Kate is to the angelic Cinderella. I’ve always thought the prince in the usual tale was rather boring. He’s little more than a handsome face, overflowing coffers, and a means to the HEA for the deserving heroine. EJ’s prince, in contrast, is no cipher. Gabriel is arrogant, intelligent, responsible, conflicted, and lusty. The last is important. AKAM is a 21st-century romance novel, after all. 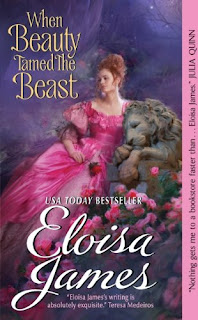 I was just one of many readers who hoped James would follow her Cinderella tale with her version of Beauty and the Beast. She did exactly that, and I think When Beauty Tamed the Beast (2011) is probably the fan favorite among the fairy tale books. Scholars have identified 179 Beauty and the Beast tales from different countries, but James’s take on the story is unique among those I’ve read. Traditionally, Beauty’s virtue equals her beauty. James begins her story with Linnet’s virtue being questioned, and Linnet’s beauty has a sensual quality that is a marked contrast to the traditional innocent beauty. Linnet’s aunt says to her, “That dimple, and something in your eyes and about your mouth. You look like a wanton.”

Linnet’s intelligence is as important as her beauty. Moreover, it marks her as a misfit in London society. Her aunt cautions her, “I’ve told you time and time again, all that cleverness does you no good. People would like a lady to be beautiful, but they expect her to be ladylike, in short: sweet, compliant, and refined.” One of the ways the reader understands that Linnet belongs in Piers’s world is that the intelligence, tartness, assertiveness, and earthiness that had to be hidden in the polite world are the very qualities that make her a suitable match for the Beast.

I’m quite certain Piers is the first Beast who is a practicing physician. The Beast most often is imaged as a lion-like creature, although various versions have portrayed him as looking like a bear, a warthog, and an elephant. Piers, on the other hand, looks rough and uncivilized, but Linnet is aware of his physical appeal and power almost immediately.

Her first impression of the rude man was that he was big—huge, in fact. The blond doctor was tall and lean, but this man was even taller, and much bigger. His shoulders seemed twice as wide as those of the other men. He was all muscle, with a kind of predatory force that looked out of place next to a sickbed. In fact, he looked as if he should be out leading hordes of Vikings . . . berserking, or whatever it was those men did for a living.

James reveals in her “Historical Note” that the cantankerous Piers with his crippled leg was inspired not by earlier Beasts, but by TV’s Dr. Gregory House. House fans will recognize similarities to the acerbic doctor in the Beast’s difficult relationship with his father, his battle with chronic pain, his skills as a diagnostician, and his disregard for medical protocol as well as in his temperament and sharp wit.

James also does some interesting gender role reversal. It is Linnet, not Piers, who undergoes a physical transformation, and it is she who asks the question traditionally posed by the Beast: Do you love me?  In the most emotionally powerful scene in the book, it is Piers who finds Linnet and brings water to revive her. The most traditional part of WBTTB may well be the ending when once again love proves redemptive and a fruitful marriage provides the HEA. 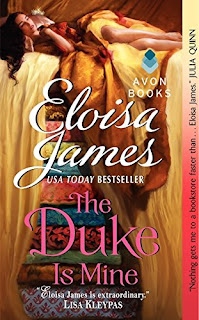 “The Princess and the Pea” serves as James’s inspiration for The Duke Is Mine (2011), the third book in her fairytale series. The novel incorporates elements of the original tale into the romance to the degree that the fairytale narrative is recognizable, but James departs from traditional material to suit her own purposes. The “pea” is a cleverly handled but minor point, the duchess who wrote the book, literally, on what separates “real” duchesses from unsuitable ones is forced to change her opinion, and “realness” becomes a criterion applied to all the characters, not just the heroine.

Like the princess in the fairy tale, when Olivia first meets “the prince,” she is a refugee from the storm. Hans Christian Andersen’s tale describes the princess as “in a sad condition; the water trickled down from her hair, and her clothes clung to her body.” But even in this pitiable condition, Andersen’s princess is confident that she’s the real thing. On the other hand, Olivia doesn’t feel like a real princess—or even a real duchess. She is convinced that she is totally unsuited physically and temperamentally to be a duchess. Olivia is everything Quin’s mother finds most unsuitable for a real duchess, and it is not she but her sister Georgiana who is being tested by the reigning matriarch. But Olivia is no passive princess who goes meekly off to sleep on twenty mattresses. She challenges Quin from their first exchange. I loved her irrepressibility and vulnerability and determination to be herself. I loved that she was more earthy than ethereal. I loved her wit and her bawdy sense of humor. I loved that she matures and sees with clearer vision by the novel’s end. I loved her intelligence, strength, and honor. I loved her understanding heart.

And Quin! I fell hard for him from the first description.

. . . The Duke of Sconce was the sort of man repulsed by the very idea of fairy tales. He neither read nor thought about them (let alone believed in them); the notion of playing a role in one would have been preposterous, and he would have rejected outright the notion that he resembled in any fashion the golden-haired, velvet-clad princes generally found in such tales.

Tarquin Brook-Chatfield, Duke of Sconce—known as Quin to his intimates, who numbered exactly two—was more like the villain in those stories than the hero, and he knew it.

I loved Quin’s intelligence, his passion for mathematics, and his logic. Most of all, I loved his overwhelming feelings for Olivia.


Some readers took James to task over Rupert, Olivia’s fiancé who is developmentally delayed, because they felt he was only an object of ridicule. That was not my reading of the book. Yes, there are some insensitive comments early on, but the characters—and the reader—discover by the end that Rupert is the most real of all the characters—not because he ends up a military hero but because he had all along the sensitivity and compassion that are the very definition of realness, as the story of the Princess and the Pea illustrates.

Come back tomorrow for part two of the Enchanting Standalone Novels of Eloisa James!

Have you read the three books discussed in today's post?

Do you enjoy fairytale romances?

Do you agree with Janga's opinions of the books or do your thoughts differ?

I have a print copy of A Kiss at Midnight for one randomly chosen person who leaves a comment. (U.S. addresses only)