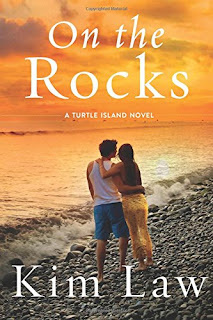 With one of her best friends reunited with the love of her life and the mother of a blue-eyed baby boy (Ex on the Beach) and the other married to the man of her dreams with a baby on the way (Hot Buttered Yum) and even her widowed mother flashing the perfect engagement ring and planning a wedding, thirty-year-old Ginger Atkinson is fighting the green-tinged monster. She doesn’t want to be jealous of these women she loves, but Ginger thought she would be happily married with a good start on the four children she always planned to have by this point in her life. She’s building her dream house, but even that means less than she thought it would because she has no one with whom to share it. Even though she loves the ferry business she inherited from her father and is proud of having grown it into a business that offers dinner cruises, fishing expeditions, and other activities, Ginger wants more. She also wants more than a series of failed dates and two years of celibacy.

Carter Ridley is mad at the world. He loved growing up on Turtle Island, but he has no desire to be there now. Unfortunately, his mother has guilted him into paying a visit to check on his younger, single sister who is seven months pregnant. Carter reluctantly agrees, but he is determined that he will stay only a few days, not the three weeks on which his mother insisted. All he wants is to be left alone with his anger, his writer’s block, his cigarettes and beer in the house he built for the wife who betrayed him. He’s not doing much more than sniping at his sister and drinking too much when a visit from an old friend starts to change things.

Growing up, Ginger and Carter had been next-door neighbors and good friends, sharing sunrises and dreams and just generally being there for one another. It takes some persistence on Ginger’s part, but gradually they renew their friendship, meeting to watch the sun rise together, to make each other laugh, and to talk at night when the darkness makes it easier to be vulnerable. When Ginger’s contractors let her down, Carter doubles the crew he has coming to the island to renovate his parents’ house so that Ginger’s house will be completed before her mother’s wedding. He even finds a spot in the house that inspires his writing and starts working on his book again. Ginger knows when to push him to talk and when to be silent. When the two of them decide to add benefits to their friendship, they agree that part of their relationship is temporary. They will enjoy each other and still be friends when they are no longer lovers. Of course, it’s not that simple. Time with Ginger has almost healed Carter when a message from his ex reawakens all his bitterness., and things look bleak for these friends who could be much more.


Friends to lovers is one of my favorite tropes when the friendship seems like the real deal. It does in this case. Even though Ginger and Carter lost touch, they have a long history together, and it is clear they know each other in a way that attests to their intimacy.  They genuinely care about one another as well. Carter encourages Ginger to be herself, and she knows he needs to talk about what happened with his ex.  When they become lovers, they are sizzling hot together. Their chemistry is intensified by their knowledge of one another and the trust that already exists between them.

I loved Ginger. She is just eminently likeable with her quirks, her insecurities, her zest for life, and her big heart. I also loved the friendship between her and Andie and Roni. It too feels real, from the phone calls to the girls’ night to their understanding things that are not said. I liked Carter too. It is clear from the beginning that he is one of the good guys who is not dealing well with the knock-out punch his ex gave him. I’m really tired of heroes who are soured on love and life forever because one woman betrayed them, but Carter is dealing with something much heavier than the usual infidelity. There is also an interesting gender role twist going on since Carter is a romantic who expects the HEA. But I think the thing I liked best was that both Ginger and Carter understand they have to find wholeness within themselves; it can’t be given by someone else.

This is the third novel in the Turtle Island series. Readers who read the earlier books will enjoy the updates on Andie and Roni, but the book also works well as a standalone.  I particularly recommend this one for readers who like their romance with heat but have read too many books in which character development and plot are sacrificed to add one more sexy scene. Law gives her readers ample action in the bedroom (and elsewhere), but she does not do so at the cost of her characters and their story.