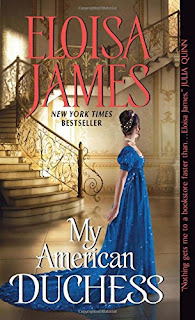 Miss Merry Pelford has the unfortunate habit of falling in love. Repeatedly. With the wrong men. Though perhaps it's more accurate to say Merry has a habit of falling in love with love. After breaking two engagements and being sued for breach of promise by the second fiance, Merry's name is on the lips of every gossip in Boston and her matrimonial prospects are slim. Her guardians, her beloved aunt and uncle, have brought her to London - far from wagging tongues - to find a husband. Merry hopes to find a man who wants her for herself, not her fortune, and believes she's found him in the bright and shiny Lord Cedric Allardyce, younger twin of the Duke of Trent.

The Duke of Trent is captivated by the delightful American miss he encounters on a deserted balcony and by the end of their conversation has decided that he has finally met the woman who will become his duchess. And then he discovers she's already engaged. To his brother. Honorable to his core, he steps aside when Merry tells him she's in love with Cedric though the more he's around the couple the less he believes that's the case. And, try as he might, he just can't bring himself to view her as a sister. The desire is too strong, growing by the day and if he isn't mistaken, reciprocated by Merry.

The very night she becomes engaged for the third time, Merry encounters a man to whom she is immediately drawn. It's only later that she discovers he's the Duke of Trent, the man destined to become her brother-in-law. The more time she spends in his company, the more she likes him while her fiance becomes less appealing with each encounter. While one man appreciates her as she is, the other constantly tries to "improve" her by changing her dress, her hair, her speech and by stifling her natural enthusiasm and American ways. Merry can see the light at the end of the tunnel and knows it's a third broken engagement bearing down upon her but then Ms. James throws in a twist...and another...taking the story in a completely unexpected direction. And that's only half-way through the book!

Eloisa James is one of my favorite authors. She has her own keeper shelf in my library yet even within those keepers there are a few books that rise to the top. My American Duchess is one of the risers. It is Eloisa James at her best. After reading the book (the first time) I tried to think of a word to describe my emotions. That word is joy. This story - these characters - filled me with so much joy. Okay, not Cedric. Definitely no joy there though the book's epilogue leads me to believe there may be hope for him down the road. But Trent and Merry? Oh, yes! Let me count the ways. I love the humor (traditional, smitten English duke vs outspoken, effervescent American miss), their intelligence, kindness, passion. Definitely their passion! I want to be their friend. I want to spend a few weeks at their estate, digging in the garden dirt with Merry and playing with George, their adorable puppy. I want to give Trent hugs because with his childhood he deserves all the hugs he can get. I love that both Trent and Merry bring something to their relationship that the other needs and that, together, they are whole. But I also appreciate that it takes them time to realize this. They both have past baggage to unload and choppy waters to navigate and Ms. James steers them through with supreme skill and realism. Their happiness is hard won and all the more satisfying because of it. I have complete confidence that 40 years from now, they will still be deeply in love and slipping away to the estate greenhouse to indulge in a little "afternoon delight."

If you're an Eloisa James fan, you'll want to add My American Duchess to your keeper shelf. If you haven't yet read her books, this standalone is the perfect place to start. It has my highest recommendation. Now, if you'll excuse me, I think I'll pay a visit to Merry and Trent. For the third time.


Have you read any Eloisa James books?

Do you enjoy "fish out of water" stories? Merry - our American heroine - certainly isn't swimming in the same pond with English misses - something deeply appreciated by her hero!

Have you read My American Duchess yet? What did you think?

One randomly chosen person leaving a comment will receive a print copy of My American Duchess.
(U.S. / Canadian addresses only)