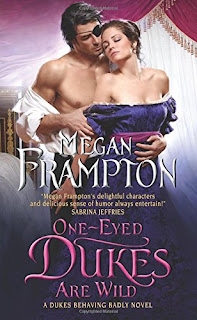 Lady Margaret Sawford, sister of Isabella, the Duchess of Gage (Put Up Your Duke) has been a scandalous figure since she refused to marry the man her parents chose for her and compounded that offense by revealing that she was the “lady of mystery,” author of a popular series featuring Georgiana and the Dragon. Lady Margaret’s parents cut her off financially and emotionally. Although Isabella and Gage offer her a home, Margaret prefers her independence. If she is frugal, her writing and the money she wins playing cards give her enough to support herself, a maid and a groom, and the cause of abused women. Margaret knows the ton tolerates her because she is just scandalous enough to provoke gossip but not shocking enough to be ostracized.

The Duke of Lasham with his powerful body and his black eye patch may look piratical, but in reality he is rigidly correct, careful to always do the right dukely thing, and tolerating the relentless stares and banal remarks because that too is part of being a duke. Drawn to what he describes as the “sparkling” quality that he sees in Margaret, he is nevertheless leery when she enters a room in which he has taken refuge from the crowd. But he soon learns that far from planning to trap him, Margaret has no interest in marriage, not even to a duke. He has never met anyone like her, and he is haunted by her and by the question she posed to him: “What would you do if you could do anything you wanted?”
When he follows her on one of her rescue missions to a seedy part of town, he becomes the rescuer not only of the poor, hapless women Margaret is determined to save but of Margaret herself. It is a role that will become familiar to him as their lives become more and more entangled. No matter how convenient Lasham may be on her missions, no matter how much she delights adding notes of joy to his somber life, no matter how addictive she finds his kisses, Margaret will not say yes to a man who cannot say the right words. And Lasham just keeps saying wrong words. Can he get his heart and his speech sufficiently in sync to win a yes from his unconventional lady?
One-Eyed Dukes Are Wild is the third book in Frampton’s Dukes Behaving Badly series, and while the humor in this one is in a lower key, it is still a story that makes the reader laugh and sigh and fall in love with these characters. Margaret possesses an unusual degree of self-knowledge for one so young. She knows her choices are unconventional, and she understands both the freedom and the losses that are the consequences of those choices. Her commitment to helping powerless women help themselves is admirable, but she sometimes acts with a foolish disregard for her own safety. But the errors show she’s human. An only child who inherited his title and its responsibilities at an early age, Lasham is Margaret’s opposite, a man whose sense of self is almost totally tied to his position as duke. It is not only that other people see him as a duke; except for a limited interior life and rare moments with his friend Jamie, that is how he sees himself. Meeting Margaret changes him.

He would meet Lady Margaret at the gallery. He would attempt to respond to her flirting as though he had not just learned how to speak the English language, and he would perhaps even go so far as to engage her for a dance at the next social event they would both be attending.

That those events counted as “different” in his world was a fairly strong indicator of just how boring he – or maybe just his life – was.
Although Margaret is delightful, Lasham, because of the changes, is the more interesting character.
The tale of Georgiana and the Dragon, bits of which, introduce each chapter, is amusing on its own and becomes particularly interesting as it functions analogously with Margaret and Lasham’s relationship.


One-Eyed Dukes Are Wild is a great addition to a series that is on my never-miss list. If you like historical romance with humor, heart, and heat that features characters who are a joy to encounter, I definitely recommend this one.