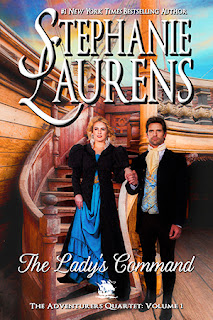 The instant Captain Declan Frobisher laid eyes on Lady Edwina Delbraith, he knew she was the lady he wanted as his wife. The scion of a seafaring dynasty accustomed to success, he discovered that wooing Edwina was surprisingly straightforward—not least because she made it plain that she wanted him as much as he wanted her.
Declan's vision of marriage was of a gently-reared wife to grace his arm, to manage his household, and to bear his children. He assumed that household, children, and wife would remain safely in England while he continued his life as an explorer sailing the high seas.
Declan got his wish—up to a point. He and Edwina were wed. As for the rest—his vision of marriage…
Aunt of the young Duke of Ridgware and sister of the mysterious man known as Neville Roscoe, London's gambling king, even before the knot was tied Edwina shattered the illusion that her character is as delicate, ethereal, and fragile as her appearance suggests. Far from adhering to orthodox mores, she and her ducal family are even more unconventional than the Frobishers.
Beneath her fairy-princess exterior, Edwina possesses a spine of steel—one that might bend, but will never break. Born to the purple—born to rule—she's determined to rule her life. With Declan's ring on her finger, that means forging a marriage that meets her needs as well as his.
But bare weeks into their honeymoon, Declan is required to sail to West Africa. Edwina decides she must accompany him.
A secret mission with unknown villains flings unexpected dangers into their path as Declan and Edwina discover that meeting the challenge of making an unconventional marriage work requires something they both possess—bold and adventurous hearts.

The Lady's Command is the first of four books in Stephanie Laurens' new series, The Adventurers Quartet. It's a bit out of the norm in that the reader does not accompany the hero and heroine on their journey to love. Instead, the book opens three weeks after Declan Frobisher and Lady Edwina Delbraith have wed. While Edwina and Declan are in love and happily living within the honeymoon glow, it quickly becomes apparent to the reader that they have different ideas of how their marriage will work. Declan expects Edwina to tend to home and hearth while he sails off on company business and the occasional secret mission his family is called upon to complete for the Crown. Edwina is determined to have a marriage of equals. She's in the dark as to what Declan will be doing when he announces he must sail to West Africa mere weeks into their marriage but there's one thing of which she is certain. She will not be left behind. But when she stows away on Declan's ship, leaving him no choice but to take her along on his secret mission, will it bind them closer together or will the danger to Edwina tear them apart forever?

The Lady's Command is a tale of two halves. I found the first part of the book, set amidst ton dinners and balls in London, to be repetitive and slow-moving. It's filled with a lot of descriptive prose and establishing the hero's and heroine's thoughts regarding marriage. It's a lot of "tell" and not much "show." The pace picks up when Declan and Edwina arrive in West Africa and I began to enjoy the book a lot more. There's a mystery to be solved and as we learn more about the people who have gone missing and who the villain might be we also begin to delve beneath the surface with our main characters. There's much more development of them individually and as a couple.

There's a lot of stage-setting in this book, as one might expect from the first in a four-book series with an over-arching mystery. While that slowed things down a bit, I still enjoyed the second half of the book and am invested in discovering who is behind the kidnappings and why they are taking place. I have to admit that while I liked Declan and Edwina and was happy for their happy ending, I found myself more intrigued by the mystery aspect of The Lady's Command than I was by the romance. Maybe I didn't feel as invested in their HEA because I missed out on the emotional intensity of their courtship. I am, however, invested in the mystery and will be picking up the second book in the quartet, The Buccaneer at Heart (April 26) to find out what happens next!

Do you enjoy a sea-faring romance?