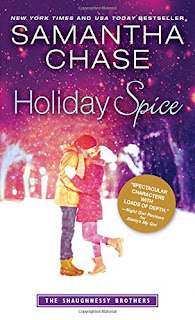 Samantha Chase wraps up her Shaughnessy series with the story of the youngest sibling and the only girl in the large, tightly-knit family. Unable to find a job in an art gallery or on the staff of an art magazine, her preferred careers, Darcy Shaughnessy is visiting her rock star brother Riley and his journalist wife Savannah (This Is Our Song) in California for some time with her newest niece. When Savannah, immersed in new motherhood, asks her to fill in and assist artist Ben Tanner to complete a book about his art, Darcy agrees. Getting to the reclusive artist’s remote cabin in Washington proves to be more daunting than Darcy expected, but her first impression of Ben is a positive one. This job may turn out to be fun.

Ben and Savannah became friends when she interviewed him before her marriage to Riley Shaughnessy, and she is one of the few people Ben trusts. He is not thrilled with the idea of a stranger doing the job he had expected Savannah to do, but he decides to accept her assurance that Darcy is perfect for the job. He is even more willing after meeting Darcy. The two have an immediate rapport. That changes when Darcy jumps to the conclusion that Ben’s repeated praise of Savannah is rooted in his romantic feelings for her. The collaboration that began with such promise grows strained as Darcy noticeably cools her response to Ben.

An early snow storm interferes with Darcy’s plan for a quick departure. Snowed in together in Ben’s cabin, the two quickly clear up the misunderstanding, clearing the way for their initial attraction to grow into something more substantial. The hours of seclusion encourage emotional as well as physical intimacy, and neither is ready to see the relationship end when the roads are cleared. But Darcy needs to return to North Carolina and resume her search for a permanent job, and Ben needs the solitude of his Washington studio to complete work for which people are waiting. However, they are convinced they can make a long-distance relationship work. But the oppositions that heightened their attraction when they were alone create problems when distance and the presence of others magnify those differences. They love each other, but will love be enough to bridge their different worlds?

The final book in Chase’s Shaughnessy Brothers series is an opposites-attract tale that takes an unusually realistic look at the problems personality differences can create. Darcy and Ben have a basic compatibility. There is a mutual attraction, of course, but they also share an interest in art. Ben’s medium is wood, and his creations are described in enough detail to make the reader long to see them.  Darcy’s strengths lie in organization and administration. They recognize and respect each other’s gifts. They fall in love. As long as only the two of them are involved, passion, liking, respect and love offer the promise of forever, but no one can live in such isolated bliss for long. Not only are Darcy and Ben’s lives based a continent apart, but hers is family-centric and his is strictly solo.

Darcy, with a doting father and five protective older brothers, is spoiled. She expects things to go her way. When they don’t, she runs away. A gregarious extrovert, she has the social skills and confidence typical of the youngest child, but she also has insecurities. She is the only one of the six Shaughnessy siblings who has no memories of her mother. Nevertheless, her lack of memories is a factor in the woman she becomes just as much as her brothers’ particular memories of their mother help to shape them as men.  Ben has the introvert’s usual need for quietness and his own company, and in him these tendencies are exacerbated by his response to the death of his parents. He loves his brothers, but he maintains both a physical and emotional distance from them. He rejects projects that would advance his career if they impinge on his solitude. He likes Darcy’s family, but he has no understanding of all the ways Shaughnessy family members are entangled in one another’s lives—or why they like it that way. Darcy finds it just as incomprehensible that he can go months with no contact with his brothers.

Fittingly enough, it is her brother Owen (A Sky Full of Stars), the Shaughnessy closest to Ben in temperament, who has the best advice for Darcy at her darkest moment.

You can’t change who you are any more than Ben can change who he is. You are impulsive and excitable and passionate about the things you want and believe in. He’s a private and intellectual person who is passionate about the things he wants and believes in. You have to find the right balance, and it’s not something that just happens, Darcy. It takes work.


There are many things to like in this book other than this bit of pragmatism. The Shaughnessys and their increasing tribe are a warm, wonderful family. This is a Christmas book, and Chase juxtaposes the Shaughnessy family-centered holiday, rich in cherished traditions, with the Tanners’ redefining of their holiday as they acknowledge the grief they have associated with the season for most of their lives. The result is a book that is both heartwarming and thought-provoking. As for the romance, readers get their HEA, but with a dash of realism in the mix. Readers who have followed the series will likely be pleased with this conclusion. Readers who have not read the earlier books but like contemporary romance with meaningful family dynamics, an H/H relationship that mirrors real life conflict, and a light touch with spice (despite the title) should also appreciate it. It can be read as a standalone, but I am such a Shaughnessy fan that I can’t imagine not wanting to read all six books.
Posted by pjpuppymom at 12:30 AM