Review - - The Winter Wedding Plan & One Week to the Wedding 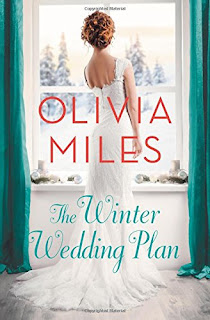 In The Winter Wedding Plan, Olivia Miles takes her readers back to Misty Point, Rhode Island, for the story of Charlotte Daniels, the younger sister of the heroine of One Week to the Wedding. Although Charlotte returned to Misty Point to get her life together and to heal the breach with her family, things are not going well. Kate’s former fiancé, the father of Audrey, Charlotte’s seven-month-old daughter, has refused any contact with the infant and except for a one-time check for $10,000, pays no child support. Charlotte, determined to prove to her family that she is not a hopeless screw-up, has allowed them to think that he is supporting his child.

Charlotte is struggling to care for her daughter and to use her job in Kate’s fledgling event-planning business to earn her sister’s respect. But sleep-deprivation and financial woes severe enough to have her facing eviction from her tiny apartment make her doubt her ability to meet Audrey’s needs and her limited responsibility at Kate’s business makes achieving her secondary goal unlikely. She hopes moving to her parents’ home will relieve some of the financial pressure, but when her parents announce that they are moving out-of-state to care for an aging parent and her back-up plan of sharing her cousin Bree’s house falls through, Charlotte is staring homelessness in the face. This is her situation when Kate asks her to meet with a new client to plan a Christmas party.

Gregory Frost, heir presumptive to the Frost Greeting Card Company, needs more than a party planner; he needs a fake fiancée. He recently split with his fiancée over a difference of opinion about having children, and his mother has decided that an engagement announcement at the company’s annual Christmas party to be held at their Misty Point home is just what is needed to win the account of a huge department store committed to a family-friendly image. If Greg doesn’t cooperate, his mother is threatening to give the company that is Greg’s legacy to his cousin. Greg decides the pretty party planner can plan the Frost Christmas event and serve as his temporary fiancée.

At first, Charlotte is insulted by Greg’s proposal and rejects it roundly, but his account offers her a desperately needed bonus and a way to prove to Kate what she can do. When the eviction she has feared becomes reality and Greg offers her a place to stay while she plans the Frost party, she can’t say no. But she is not prepared for all the deception that will involve or for the stress of keeping the truth from Kate. Greg is not prepared for Audrey or for all the complications his mother’s early arrival will bring. Deceptions abound in this novel, but the greatest deception may be the one Charlotte and Greg are playing with their hearts.

I became an Olivia Miles reader with her Briar Creek books, a series I enjoyed so much that I recently marked it, with its bookend Christmas books, for a December reread. I had high hopes for the Misty Point series. I knew I liked Miles’s voice, and I am a fan of the hybrid form of women’s fiction that romance authors tend to produce when they turn to that genre. But so far, I have been disappointed.

I liked Kate in the first book, and I rooted for her and Alec to resolve their differences. However, I am not a fan of love triangles involving siblings, regardless of the twist an author gives the triangle. That is a personal response, and I know many readers seek out these books. But for me, Charlotte started with one strike against her. She does earn sympathy points for her remorse and for her difficulties as a single mother, but these are undercut by the fact that she seems so immature. If I had not known that she was twenty-eight, I would have guessed she was at least seven years younger. I also had little sympathy for her choice to keep the truth of her situation from her family. By the end of this story, she has matured, but I would like to have seen more of the process. I found Greg rather more likable, but he somehow lacked the full dimensionality I expect in primary characters. I did love Audrey; she had all the adorability and fractiousness of seven-month-olds I have known.

The greatest flaw in this book was the Bree factor. At intervals, the story switches to this character, and these sections consist mostly of her thoughts. Since I found her to be a whiny woman seriously lacking in discernment, I hated these sections. I have little patience in life or in fiction for women who confuse their image of a man with who he really is, regardless of the evidence. This character’s only redeeming quality was that she genuinely seemed to care about Charlotte and Audrey. I longed for a version of the book pruned of the Bree distractions.

In summary, The Winter Wedding Plan is not a bad book. I might have liked it more had I expected less. It also hit a few of my hot-button issues with force. Other readers will react differently. Misty Point is an appealing setting. Readers who liked Kate and Alec in the first book will enjoy seeing more of them. And the sisters are fully reconciled. There is also the holiday factor. The novel opens with Thanksgiving dinner and ends at a Christmas party with lots of holiday festivities in between. Although labeled women’s fiction, the romance is central enough to satisfy most romance readers. If you like holiday books high on the sweetness scale, this may be just your cup of wassail (without the hard cider).

Kate’s friend and town baker Colleen is delightful, and there is a suggestion that she has met her hero after years of unrequited love—and the new man is auburn-haired. I like the sound of that. I look forward to her story, which means I’m still in if Miles writes more books in this series—just not for Bree’s book.


One Week to the Wedding
By Olivia Miles
Publisher: Forever
Release Date: June 13, 2017
Reviewed by Janga 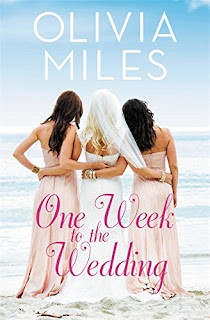 Kate Daniels is playing dual roles in her best friend’s wedding. She is the wedding planner and the maid of honor. The pressure is heightened by a boss who is looking for Kate to make a mistake so that she can fire her. But Kate’s greatest difficulty comes with her memories. Every fitting, every visit to the caterer, and every petal on the selected flowers awaken memories of Kate’s own wedding that never was, the one that was canceled when her fiancé, Jake Lambert, betrayed her. The betrayal was particularly devastating since the other woman was Kate’s younger sister, Charlotte. Kate has sworn off dating, and Alec Montgomery, however attractive he may be, is far too much like her ex to make her reconsider. Or is he?

Charlotte Daniels has made half a dozen phone calls to her sister. Kate might never forgive her, but Charlotte is determined that Kate will learn the truth of what happened with Jake Lambert, a truth that includes the existence of Charlotte’s infant daughter. Just as soon as she gets her life together, Charlotte plans to return to her hometown and reconcile with her family, but with money getting scarcer and life as a single mother getting more difficult, she may not have the luxury of delaying her return.

Alec Montgomery is ostensibly in town for a week for his brother’s wedding in which he is to serve as best man. No one knows that Alec has two purposes for taking a rare week away from his high-pressure Boston job, and neither of them is to celebrate the wedding. He is there to meet with a prospective client who can help save the Montgomery family business and to convince his younger brother William that he made a mistake when he left the family firm to marry and start a new life—and a new business—in his bride’s hometown. Alec never expected to end up envying his brother or to find himself thinking much too often about the wedding planner.

It is one week to the wedding of Elizabeth Jones and William Montgomery, and things are humming in Misty Point as the day draws near. Can Kate see that her best friend has the perfect wedding? Will the best man show up? Will an unexpected wedding guest prove too much for Kate?

One Week to the Wedding introduces a new series from Olivia Miles. Set in the resort town of Misty Point, Rhode Island, the series is billed as women’s fiction rather than romance and advertised as perfect for fans of Robyn Carr, Kristan Higgins, and Susan Mallery, three authors whose women’s fiction titles have proved as popular as their contemporary romance novels. I enjoyed Olivia Miles’s Briar Creek books, but I found her first women’s fiction book less than fully satisfying.

I am not a fan of love triangles, and I find those involving siblings particularly annoying. A few authors have been able to overcome this prejudice and make me fall in love with their books. (I’m looking at you, Terri Osburn!) But those authors are exceptions. Even though the Daniels sisters and Jerky Jake are not a true triangle, I could not get past the betrayal. Charlotte evoked little sympathy. Regardless of her explanation, she came across as a spoiled brat who was forced into growing up when she had to deal with the consequences of her choices. Jake, of course, is slime, but his lack of character doesn’t excuse Charlotte’s behavior. I liked Kate, but I did wonder about her judgment. She was in a two-year relationship with Jake and only retrospectively wonders if all was not as wonderful as she thought.

Alec was a more sympathetic character. He carried some heavy baggage, and his reluctance to accept William’s breaking away was understandable. However, his transformation seemed incredibly swift to me, as did his and Kate’s tumbling into love. It all occurs within a week! William was my favorite character, and I regretted that his and Elizabeth’s story was not part of the series.

To be fair, I think some of the book’s problems can be attributed to the needs of setting up the series in the first book. In addition to Kate and Alec’s love story and Charlotte and Kate’s relationship arc, Kate’s cousin Bree and friend Colleen, potential heroines for future books, are introduced along with hints about what is going on—or not going on—with their love lives. That is a lot to pack into one book, especially in one that covers only a single week.

Miles is a good writer, and Misty Point is an appealing setting. Readers who are free of my bias against triangles may find the sisters’ relationship less troubling than I did. The Winter Wedding Plan, a September 27 release, continues the sisters’ story with the focus on Charlotte, and it may temper my response to these characters. Although I am not convinced that One Week to the Wedding merits favorable comparison to Carr, Higgins, and Mallery, I am sufficiently engaged to continue with the series and hope for books I love as much as I did Miles’s Mistletoe on Main Street and Hope Springs on Main Street, my favorites in her Briar Creek series.
Posted by pjpuppymom at 12:30 AM