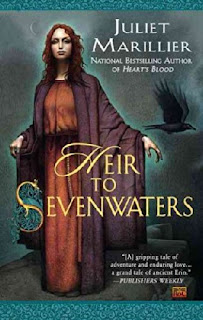 For generations, the family of Sevenwaters has protected the Fair Folk who inhabit the vast and mysterious Otherworld that is only accessible through hidden portals in the deep forest on Sevenwaters land.   Their alliance has been beneficial to both, giving neither side reason to break the trust between them, but lately there have been rumblings of a darker presence among the Fair Folk and events soon unfold that will change everything between the two worlds.
Set in ancient Erin, this is the story of Clodagh, third of six daughters of Lady Aisling and Lord Sean of Sevenwaters.  Clodagh is the steady sort who excels in housekeeping and organization and is often a sounding board for her father, the chieftain.  As the story opens her twin sister is getting married and leaving but Clodagh has put her dreams of a husband and children on hold to care for her family and home as her mother struggles through a difficult pregnancy while anticipating the long-awaited birth of her seventh child, the potential heir to Sevenwaters.   When the weakened Lady Aisling gives birth to a boy but cannot care for him she places him in the capable hands of her responsible daughter, Clodagh, knowing no harm will come to him in her care.  But when Clodagh’s attention is diverted for an instant the baby disappears and in his place she finds an ugly changeling made of leaves and twigs that only she can see breathe and hear cry.  The abduction sends her mother into a downward spiral and her father turns cold and suspicious of the daughter he once trusted implicitly, the daughter who was seen kissing a young, visiting warrior at the exact time her brother was being kidnapped.  Unwilling to listen to Clodagh’s suspicions of otherworldly involvement her father focuses all of his attention on the political rivals he is certain have stolen his son and on the young warrior who has conveniently disappeared.  When no one will listen to her Clodagh realizes that it is up to her to rescue her baby brother from the shadowy beings she is certain have taken him.  She sets aside her fears and embarks upon a journey into the mysterious Otherworld to exchange the changeling for her brother, reluctantly allowing the young warrior, who seems to know more about the frightening and dangerous place than a human should, to accompany her.
Marillier’s lushly descriptive writing brings to life a shadowy and perilous Fair Folk realm inhabited by strange creatures and ruled by a handsome but unscrupulous fey prince with no conscience and a very big secret.  The Otherworld and its inhabitants could easily have stolen the spotlight during this part of the story, but the author has deftly painted them as a mystical backdrop with an important supporting cast while allowing the heroine of the story, her quest and the deepening relationship with her hero to take center stage.  (I really liked these two young people and quickly became fully invested in their struggle to find a way to be together.)  Tested at every turn and against insurmountable odds, this ordinary girl with no special powers who has always relied on others to protect her gradually discovers that with the courage of selfless love, the impossible becomes possible and a brave young woman can not only rescue herself but her family and her beloved as well.
This is the fourth book in the Sevenwaters series, coming six years after publication of book #3, but my introduction to the works of Juliet Marillier.  While characters from the three previous books in the series either made appearances or were referenced in this book, reading Heir to Sevenwaters first in no way diminished my enjoyment of the story.  In fact, I enjoyed this book so much that I have already begun looking for the first three books: Daughter of the Forest, Son of the Shadows, and Child of the Prophecy.

Update: If you're looking for lushly written, historical fantasy, I highly recommend Juliet Marillier. You will happily lose yourself in the mystical worlds of her creation.
The Sevenwaters Series (in order)
Daughter of the Forest
Son of the Shadows
Child of the Prophecy
Heir to Sevenwaters
Seer of Sevenwaters
Flame of Sevenwaters

Marillier's current series is set in Medieval Ireland, one of my favorite eras and places. Three books in the Blackthorn and Grim series have been published to date:
Dreamers Pool
Tower of Thorns
Den of Wolves

Do you enjoy fantasy novels?
Do you have favorite titles or authors you would recommend?
Have you read Juliet Marillier's books yet?