Review - - The Scandal of it All

The Scandal Of It All
by Sophie Jordan
Publisher: Avon
Release Date: July 25, 2017
Reviewed by Santa 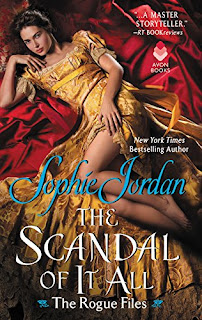 The Scandal Of It All, a four out of five star book, is the second in Ms. Jordan’s The Rogue Files. It is not your usual romance about a rogue and a young lady. That was part of its appeal for me. There is no young lady. Our heroine, is the beautiful, widowed Lady Graciela or Ela, Duchess of Autenberry. She is step-mother to the present duke, Marcus and his sister Enid. Her own daughter from that marriage is about to make her debut in polite society following the end of her mourning period. In truth, she is only a few years older than her step children.

Her’s was a loveless marriage as she utterly failed to provide her husband with a spare. He as much as told her she was a disappointment. She had no friends save for other outcasts like herself of the Ton. Her beauty, youth and Spanish heritage make others around her more than a little petty and jealous.

Following the death of a friend, she decides it is time to seek out her own pleasures. All her life she’s given herself over to the care of others. Her friend’s sudden death convinces her that it is time to take care of herself. She decides to go incognito to a notorious den of inequity.

Our hero, Lord Colin Strickland, has been commanded by his grandmother to settle down and continue the family line. She never gave him a second thought before. By this time he was used to not meaning anything to anyone. Save for his best friend Marcus, the present Duke of Autenberry, and the duke’s family, he has been alone.

Lord Colin and Ela’s chance meeting at the pleasure club catapults them into an intimate relationship from the very start. Inhibitions and hidden desires are thrown wide open. The ramifications touch everyone in Ela’s family. Here is the lad who came to dinner and now they are lovers. Lovers forced to marry after she is compromised. Believe when I say there are many not happy at all and go to great lengths to display their ire.

Throughout it all, Colin and Ela come to realize they do have real feelings for one another. And their coming together brings them more than they ever thought they would have or felt they deserved.  This is what kept me reading because I was drawn into seeing just how their story unfolded and what would make up their happily ever after. I am also looking forward to about two or three other books or novellas to round up the rest of the rogues in this series.
Posted by pjpuppymom at 12:30 AM

Email ThisBlogThis!Share to TwitterShare to FacebookShare to Pinterest
Labels: 4 Star Review, Avon Books, Historical Romance, Santa, Sophie Jordan, The Rogue Files, The Scandal of it All