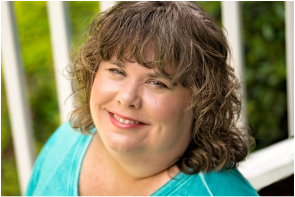 Deb Marlowe was one of the first people I met at my first RWA national conference in 2009 and one of the nicest. Since then, I've followed her writing journey with pleasure. Today, I'm delighted to welcome her to The Romance Dish to talk a bit about her two novellas in the multi-author Castle Keyvnor series.

A Golden Heart Award winner and Rita nominee, Deb grew up in Pennsylvania with her nose in a book. Luckily, she'd read enough romances to recognize the true modern hero she met at a college Halloween party--even though he wore a tuxedo t-shirt instead of breeches and boots. They married, settled in North Carolina and produced two handsome, intelligent and genuinely amusing boys. Though she spends much of her time with her nose in her laptop, for the sake of her family she does occasionally abandon her inner world for the domestic adventure of laundry, dinner and carpool. Despite her sacrifice, not one of the men in her family is yet willing to don breeches or tall boots. She's working on it.

Take it away, Deb!


Last fall, twelve authors got together for the Haunting of Castle Keyvnor series.  It was a series of stories, all set at the reading of a will in a haunted castle in Cornwall.  We had great fun intertwining the stories of our Hambly family and their friends and acquaintances, and creating all manner of paranormal creatures in and about the castle, including ghosts, gypsies, witches, a demon and pixies! 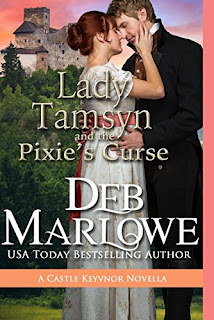 My contribution to that collection was Lady Tamsyn and the Pixie’s Curse, in the book Bedeviled.

Her father inherited an earldom and a castle. Has Lady Tamsyn inherited a curse?
It's what it feels like when she discovers that she can see the truth behind the lies that men tell. All she wanted on arrival at Castle Keyvnor was to avoid Mr. Gryffyn Cardew, but in a sea of lies, he is the one who always tells her the truth.Together they find that her curse might just be a gift--and their love the key to preventing a tragedy. 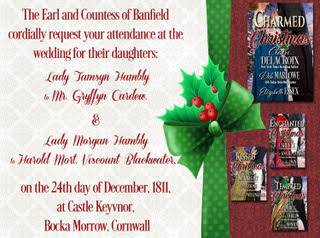 This year we decided to go back to the castle at Christmas! Two of the Hambly girls are getting married in a double ceremony on Christmas Eve—and we have twelve new stories set in and about Castle Keyvnor! 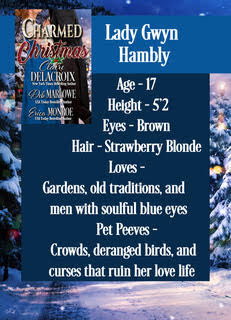 This time my story is Lord Locryn and the Pixie’s Kiss, in the book Charmed at Christmas.

When is a kiss actually a curse? When an irate Pixie forbids you to kiss the wrong girl---ever. Unfortunately, Lord Locryn Pendarvis has no idea why girls are falling all over themselves not to kiss him. He only knows that after a certain point, the risk of humiliation outweighs desire.

Until he meets Lady Gwyn Hambly again. She's witty, charming and beautiful---and just as interested in him as he is in her. They'll do anything to ensure their future together---even fight the supernatural forces aligned against them.

PJ, again! Prepare to be charmed by these sweet, delightful tales of love, romance, and a bit of magic set on the wild Cornish coast. I thoroughly enjoyed both novellas. My only complaint is that I want more! In both stories, Deb Marlowe transported me to Castle Keyvnor and into the lives of her characters, both human and supernatural. Those characters - humans, pixies, ghosts, demons, and more - are richly vibrant and fully dimensional, engaging both my interest and my emotions. Surprisingly, my emotional attachment to a well-meaning pixie and a young ghost were as strong as my bond with the human couples. Their stories, while short in length, are packed with everything I could want in a full-length romance, including sigh-worthy happy endings. Tamsyn, Gryff, Gwyn, and Locryn are all likeable characters, for whom I cheered from beginning to end. I'm hoping Deb Marlowe plans more stories at Castle Keyvnor. I'm more than ready for a return trip!

Have you read any of Deb Marlowe's stories?

Do you enjoy romances with a touch of magic?

Do you read holiday-themed anthologies?

Do you believe in things that go bump in the night?