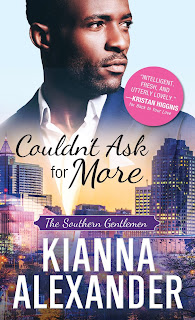 Bryan James's job is on thin ice unless he can secure a contract with a popular design house. He knows his best friend's sister can help—but her terms are more than he bargained for.
Alexis Devers's debut fashion line is a hit. But when Alexis's publicist tells buyers that it landed her a wealthy, gorgeous fiancé, Alexis needs to come up with one—fast. Bryan's offer to strike a deal is perfectly timed. She's more than willing—on one condition...
It's the perfect plan...until feelings start getting in the way. Suddenly, the dangers of mixing business and pleasure become much more real than either of them expected.

This was my first book by Kianna Alexander and I enjoyed it. The hero and heroine are both likable, realistic characters with careers not usually encountered in my romances. I enjoyed the glimpse into the inner workings of a clothing manufacturer and a clothing design house, especially as the story takes place in North Carolina, a state with a rich textile history. It's clear the author knows the state, and its capital city of Raleigh well, creating a well-described sense of place.

Both Alexis and Bryan are surrounded by friends, family, and co-workers who are featured prominently in the book and give readers additional insight into these two characters without stealing the limelight from them. I was intrigued by Alexis's close-knit, supportive family and hope to see more of both Maxwell (her over-protective older brother) and her sister, Kelsey (an abusive relationship survivor) in future books. One of the things I admired about Bryan was his involvement in the community and especially his dedication to mentoring youth. My feelings for his family were not of the warm fuzzy variety but I'm happy to say Bryan turned out to be a great guy, in spite of them.

There were a couple issues that knocked my rating down a bit. While I liked the gradual transition from fake couple to friends to love, I wanted more emotional depth in their relationship. Also, there's a misunderstanding near the end that Alexis responds to in a manner that I found inconsistent with her behavior throughout the rest of the story and a speedy resolution that had my head spinning. But, in spite of those issues, I still enjoyed the story and am invested enough in the remaining characters to return to Raleigh and the other Southern Gentlemen for the rest of the series.
Posted by pjpuppymom at 12:30 AM