Spotlight on The Good, the Bad, and the Duke


Even though Paul Barstowe was the villain of The Bad Luck Bride, book one of Janna MacGregor's Cavensham Heiresses series, I still found him intriguing, though definitely unlikable. In book two, The Bride Who Got Lucky, he showed a glimmer of goodness - a remote possibility that he just might be redeemable.  In MacGregor's upcoming novel, The Good, the Bad, and the Duke, we discover just what made Paul, now the Duke of Southart, the man he was and has now become. Is he deserving of a second chance? Is he worthy of Daphne's heart? I've read an advance copy of the novel and, for me, the answer to that question is an enthusiastic YES!

The Good, the Bad, and the Duke
By Janna MacGregor
The Cavensham Heiresses - Book 4
Publisher: St. Martin's
Release Date: November 27, 2018 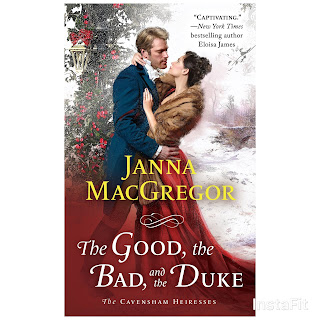 Lady Daphne Hallworth is ready to celebrate the holidays with her family. But when they accidentally leave her home alone, Daphne uses the time to work on her dream—opening a home for unwed mothers. But her quest isn’t problem-free: She’s in a battle to win the property for the home against her brother’s best friend-turned-enemy, Paul Barstowe, Duke of Southart. And that’s not all: someone has stolen her personal diary, which holds secrets that could devastate her family. Daphne has always harbored private feelings for the man her family scorns…though perhaps striking a bargain with the handsome Duke will solve both their problems?
Paul, long considered good for nothing, aims to open a hospital to honor his brother and restore his reputation. So when a conflict over the land brings him straight into Daphne’s life, they make a deal: He will help her find her diary if Daphne can change her family’s opinion of him. But before he can win her family’s affection, he has to win hers first. Maybe love was the answer to their family feud all along?

“Paul,” Daphne said a little bit more loudly. “Are you all right?”

Have you been reading Janna MacGregor's Cavensham Heiresses series?

How do you feel about former bad boys/villains as redeemed heroes?

The Good, the Bad, and the Duke pays homage to the theme used in the movie Home Alone, an annual favorite. What Christmas movies do you enjoy watching every year?

One person who leaves a comment before 11:00 PM, October 25 will receive a print advance review copy (ARC) of The Good, the Bad, and the Duke. (U.S. only)