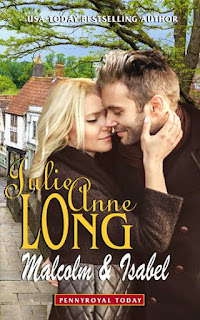 In Pennyroyal Green, the past is very much alive...but the present has a power—and a magic—all its own.Isabel Redmond never anticipated that the echoes of a legendary love will reverberate through her own life. Or that answers she's long sought might be between the pages of Olivia Eversea's diary.Until she goes in search of her roots...and meets her tall, dark destiny under a famous pair of entwined trees.One look into Isabel's heart-stopping blue eyes and town doctor Malcolm Coburn knows 1) getting involved will be risky; and 2) their chemistry will be scorching. But as they retrace Olivia and Lyon's footsteps in Pennyroyal Green, a tender, fiery intimacy emerges...and old wounds are laid bare. Will two people who guard their hearts as fiercely as their freedom repeat the mistakes of a pair of long-ago lovers...or will they let love alter the course of their lives?

Three years ago, Julie Anne Long brought her Pennyroyal Green historical romance series to an end with the long-awaited story of Olivia Eversea and Lyon Redmond in The Legend of Lyon Redmond, my favorite book of 2015 (read my Top Dish review). Turning that final page in their story was bittersweet as, with it, came a final farewell to the families I had come to know over the course of several books...or so I thought. When I began reading the (extended-length) epilogue, I realized Ms. Long had a surprise up her sleeve: an American woman, descended from Lyon and Olivia, on a three-month holiday in present-day Pennyroyal Green. What would she discover while exploring her newly-revealed family roots? Would a happy ending of her own be in the forecast or would she return to America with a broken heart? All the answers are revealed in Long's newly released novella: Malcolm & Isabel: Pennyroyal Today. For those readers who have not read The Legend of Lyon Redmond, you should know that Malcolm & Isabel begins exactly where Isabel and Malcolm's journey ended in the epilogue. I strongly encourage readers to begin with the epilogue then pick up the story to it's conclusion in the novella.

This story pushed every single one of my happy buttons. At 145 pages (not including the previous epilogue), it's longer than most novellas but short enough to be an easy one-day read, though, if you're like me, you'll want to take your time and savor each perfectly placed word. Julie Anne Long is brilliant at evoking emotion while bringing stories and characters to vivid life through the imagery created by her beautiful mastery of words. For example, there's this passage from early on in Malcolm and Isabel's relationship:

He'd forgotten what this kind of newness was like. Thrilling, yes. But it wasn't entirely comfortable. Maybe this was how the earth feels when spring comes upon it. A little raw and uncertain. Buds pushing up and roots reaching down are bound to hurt a little.

They lay in silence for a time. If he'd been asked to define "peace," he might have said, "lying in the dark next to Isabel Redmond."

The air against her skin simply felt different when he was near.

Did I mention how romantic this story is? It touched me in all the right ways, with laughter, tears, and Long's beautiful, breath-stealing language. I enjoyed the snippets of Olivia and Lyon's life after marriage that readers are treated to through the pages of Olivia's diary. While this is most definitely Isabel and Malcolm's story (and oh, how I loved these two), the interwoven glimpses of Olivia and Lyon brought an additional layer of pleasure to this longtime fan. And speaking of pleasure, let's hear it for Sir Clive Dunkirk, the crusty, aging rock star, and apparent distant relative of Isabel's, who steals every single scene he's in. By the end of the story, I wanted to download every song his band had recorded. I also wanted to stock my jewelry box with Isabel's uniquely crafted earring designs. It's a good thing both the band and the earrings are fictional or Julie Anne Long and her exquisitely detailed descriptions would be a huge drain on my bank account!

When I first read the epilogue in The Legend of Lyon Redmond, I immediately wrote to the author, begging for Isabel and Malcolm's story. When I finished this novella, I did the same. But, this time, I begged for more contemporary Pennyroyal Green tales. Long has populated this sleepy little town with a plethora of intriguing characters: from doctors, to pub owners, to charming, rapscallion musicians and self-aware actresses, to dishy vicars, to self-important aristocracy, and more. Some are descended from familiar historical Pennyroyal Green characters, others not, but all are deserving of happy endings of their own and I'm hopeful Ms. Long will agree.

Do you enjoy revisiting beloved characters after their HEA?

Isabel inherited Olivia's diary and Lyon's timepiece and cherished both. Which of your possessions would you like a future descendant to cherish?

Malcolm and Isabel each have a tattoo that reveals something important about them. Do you have any tattoos? What would yours say about you?

Because I loved both of these stories so much, I'm giving a Kindle copy of The Legend of Lyon Redmond and Malcolm & Isabel to one person who leaves a comment before 11:00 PM, October 16.
Posted by pjpuppymom at 12:30 AM