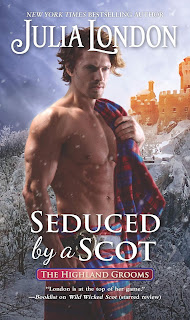 When a prominent Scottish family faces a major scandal weeks before their daughter’s wedding, they turn in desperation to the enigmatic fixer for the aristocracy, Nichol Bain. Remarkably skilled at making high-profile problems go away, Nichol understands the issue immediately. The family’s raven-haired ward, Maura Darby, has caught the wandering eye—and rather untoward advances—of the groom.Nichol assuredly escorts Maura toward his proposed solution: an aging bachelor for her to marry. But rebellious Maura has no interest in marrying a stranger, especially when her handsome traveling companion has captivated her so completely. Thankfully, Nichol loves a challenge, but traveling with the bold and brash Maura has him viewing her as far more than somebody’s problem. Which raises a much bigger issue—how can he possibly elude disaster when the heart of the problem is his own?

Having already met the hero of this story, Nichol Bain, in London's previous book, Tempting the Laird, I was not predisposed to view him with fondness as I began reading his story. It didn't take long, however, before London began slowly peeling back his layers to reveal the heart, soul, and vulnerability residing within this man who is paid to fix the problems of others while carefully hiding his own. He wasn't at all what I had expected him to be and as the twists and turns of the story revealed the secrets and events that had brought him to this point in his life, I began to be more and more in his corner. Until he let his stubborn male nature take the reins, of course. Then I just wanted to toss him out the castle window! Don't worry, he eventually won me over again.

Maura snagged my interest and my heart immediately. I grieved for the young girl who was sent to live with people who resented and mistreated her after her beloved father's death and shared her anger over the circumstances of her departure from their home. But I cheered her on with gusto when, pushed beyond her limits, she finds her strength and lets her inner woman roar. If Nichol thought he was in for an easy job with this one, he was sadly mistaken and if he thinks he can hand her over to another man and walk away after giving her his heart...well, Maura just may have something to say about that.

This final book in the Highland Grooms series had me eagerly turning pages from beginning to end. I so enjoyed it! London has penned an engaging, fast-paced story with vividly crafted characters, witty dialog, adventure, emotional vulnerability, surprising twists and turns, and an ending worthy of a smile and a sigh. It has my enthusiastic recommendation.

Fans of the series will enjoy reuniting with characters from other books in the Epilogue while readers new to the series should have no trouble enjoying Seduced by a Scot without having read the other books first.

Maura turned away from the door and looked at her prison. She had a small stack of books that were keeping her occupied, but which she’d soon finish. She was running out of wood for the hearth, her clothes needed washing and she’d lost all manner of decency. The clothes she’d been wearing the night he’d put his hands on her were discarded onto the floor, where they would remain, unless she resorted to burning them for warmth. She hadn’t bothered to dress her hair or don a gown over her stomacher and petticoat in days.
She fell onto the chaise longue at the end of the bed, and stared morosely at the ceiling with its peeling paint. She couldn’t survive in here much longer. Last night, she’d concocted an elaborate plan in her head, whereby she would will herself to make it to spring when the days would be warmer. She could simply walk out of this house once Mr. Rumpkin had fallen into unconsciousness with his fingers wrapped tightly around a bottle. But then she’d grown sullen, for spring was too far away, and there was an entire winter to endure.
She needed to devise another, better plan.
She had only a few coins, some shoes that were worthless for anything other than dancing or strolling around manicured gardens, one decent gown and one serviceable gown. The third gown she’d been allowed to leave Stirling with was the one lying in a heap on the floor.
As she lay there contemplating, she heard a sound that she would have thought was a rat scurrying by had it not come from outside the window. She slowly sat up, staring at the window. It couldn’t be. He wouldn’t, this Mr. Nichol Bain. Maura shot up from the chaise and hurried to the window. She opened it slightly, just enough to see out.
All she could see was an auburn head of hair as the man picked his way up the thick vines that covered the tower.
Bloody bounder. Mr. Garbett must have paid him handsomely to ferry her off to yet some other hell. She closed the window and latched it shut. If he thought she would open it to him, he was a fool. She went back to the chaise and plopped down onto her back, one bare foot on the moldy carpet, one arm slung across her body, waiting for the inevitable moment that he pounded on the window demanding entrance. She hoped he fell and landed on his arse. She hoped his fingers ached so much that it brought a tear to his eye.
She did not expect him to punch his fist through the glass, but that’s what he did, shattering the pane into a rain of chunks. That same fist reached through the opening for the latch and swung the window open. Maura was so stunned by this that she couldn’t move, and watched, dumbfounded, Mr. Nichol Bain’s acrobatic entry into her room.


Click for other stops on the TLC tour for this book.