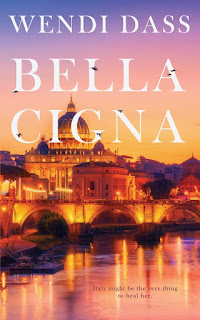 After losing everything, Sarah Flynn decides to take her friend’s advice and ventures to an entirely different continent to find herself, a bit of adventure and, in the end, love, or should we say amore.

Let me rephrase that. She doesn’t lose everything as much as it is taken out of her very hands. After two year of trying to conceive through many different procedures, she gets a call from a fertility clinic willing to work with her and her husband. This is their chance! She quit her job as a teacher to work for a federal agency in order to make more money so they could afford all those procedures! She excitedly runs home to tell her husband Phillip - who advised they take a three month break from it all - only to find him packing up his things and heading out the door to another woman! Needless to say, she is heartbroken and retreats to her mother’s home.

Her friend, Meredith, encourages her to take a leap of faith and go abroad to teach for a year, to take some chances and open herself up to adventure. Why not! That is how Sarah arrives to teach nine year olds English at La Scuola della Santa Teresa. She is met by Anna, a fellow teacher, who takes her under her wing and gets her to spread her own.

Sarah also meets Eduardo, the father of one of her students. Sarah finds it difficult to believe someone like him could be interested in her. But he sees her as beautiful both inside and out even if she does not quite believe him. After all, her husband had seen her as less than perfect but Eduardo sees her as a bella cigna - a beautiful swan. To him, she is perfetta - perfect. This is Sarah’s journey across an ocean to find and love herself - and Eduardo.

I highly recommend this debut novel to women’s fiction and romance readers everywhere!