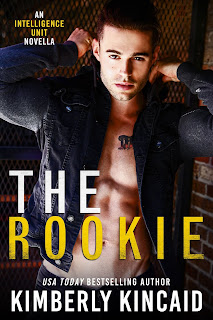 Police recruit Xander Matthews wants two things: to help people and to keep his dark and dangerous past in his rear-view, where it belongs. He never thought he'd see brash, beautiful A.D.A. Tara Kingston after she tried to prosecute him two years ago.
Yet here she is, smack in the middle of a crime scene and now they have to work together to catch a killer.
Tara prides herself on being tough - after all, she learned the hard way how fleeting life can be. But the closer she gets to Xander the more she wants to open up and let him in. The more she wants everything.
The stakes are high and the passion is hot. But Xander's secrets run deep and now their hearts and their lives are on the line...
PJ's Thoughts:
Kimberly Kincaid never fails to fully immerse me into her fictional worlds. In The Rookie, she brings readers a passionate, fast-paced, romantic suspense story that grabbed me from the start and refused to let go. It's a novella, but longer than most at 150 pages, with layered characters and emotional depth usually found in full-length novels.
I was invested in Xander and Tara almost from the beginning and enjoyed the development of their characters individually as well as the two of them as a couple. The supporting cast was equally intriguing, adding texture to the story, and the suspense factor kept me on the edge of my seat right up until the end.
In addition to meeting characters who are new to the Remington world, familiar characters from previous books (and series) set there make appearances in this story. While it's fun for fans to see them again, new readers won't miss out on anything by beginning with The Rookie. I thoroughly enjoyed this story and am already excited about The Intelligence Unit series and future stories to come. If you haven't yet discovered Kimberly Kincaid, this would be a great place to start.
Posted by pjpuppymom at 8:30 AM