Review & Giveaway - - Lady Lilias and the Devil in Plaid 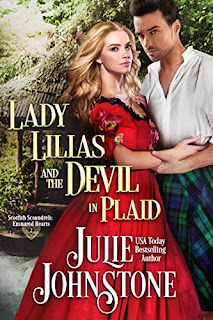 Free-spirited Lilias Honeyfield has a secret. She’s certain the rich and powerful Duke of Greybourne is meant to be hers. He just needs to reappear in her life and stop denying his love for her before she’s forced to wed another. Though it’s been seven years, she has never forgotten the beautiful but tormented man hiding behind the mask of moody boy, nor does she believe she imagined the searing passion between them. But the day Nash Steele finally reappears in Town, the rogue destroys her hope by claiming he never returned her affection.Nash Steele is haunted by his mistakes and the memories of the impetuous, headstrong beauty who breached his heart and soothed his soul years ago. But innocent Lilias was never meant to be his. And if he ever doubts it, he reminds himself of the tragic accident he caused soon after they met. His life is now, and will always be, one of penance. Unable to have the one woman he wants, the easiest thing to do is to flee. So when duty eventually forces him home, he intends to keep his distance from the ravishing creature. Yet when danger threatens her, he cannot sit by and allow her to be harmed. Every moment in her presence is sweet torture, and soon the need he has kept caged for years refuses to be contained any longer.Swept together by burning desire but ensnared in a tangle of secrets and guilt, Lilias and Nash must fight to turn tragedy into triumph and the past that threatens to destroy them into the very thing that heals their hearts.
PJ's Thoughts:
When I pick up one of Julie Johnstone's books I know I'll be fully immersed in the hearts and minds of her well-developed characters as well as the world in which they live. From the wide open spaces of the Cotswolds to the glittering ballrooms of London to the dark and dank alleys of St. Giles, Lady Lilias and the Devil in Plaid transported me into a fictional world that Johnstone brings vividly to the page.
Lilias and Nash captured my affection almost immediately upon meeting them as youths and my heart ached for the years they were separated. Nash's anguish was almost palpable; Johnstone is a master of emotionally tortured heroes. And Lilias. I adored her adventurous spirit, her straightforward demeanor, and her kindness to others. But I ached for her yearning heart and for the heartache of betrayal that she wasn't expecting. I loved the chemistry between Lilias and Nash and was cheering them on the entire way though Johnstone sure didn't make their journey an easy one. I have to admit, there were many times when I couldn't figure out how in the world she was going to pull off a happy ending. Of course, she did, and in a swoon-worthy, heart-stopping, just in the nick of time manner that had me sighing with delight and shedding a few tears for good measure.
The secondary cast adds a richness to the story without pulling the primary focus from the main couple while offering glimpses into the lives of characters from book one, Lady Guinevere and the Rogue with a Brogue, and introducing new characters to the mix. I admit to having very strong - and mixed - feelings about some of them. As frequently happens with Johnstone, there were a few unexpected twists that completely changed my view of a few characters. I like being surprised. There's also a character who betrays Nash and Lilias who has me trying to decide if I want a hard-earned redemption or for the person to slink off to the country never to be heard from again (I don't know what Johnstone has planned for this character but, whatever it is, I have confidence that I'll be happy with her decision). On the other hand, I do know that the next book in the series will be Lady Constantine and the Sins of Lord Kilgore and I cannot wait to unravel all the secrets these two are closely guarding.
If you enjoy emotional Regency romance with well-developed characters, second chances, and plenty of twists and turns, give this one a try. It's the second book in the series with several cross-over characters but also stands quite well on its own.
~~~~~~~~~~~
Have you read Julie Johnstone yet?
Do you enjoy romances with twists that keep you guessing right up to the conclusion?
One person who comments before 11:00 PM, October 31 will receive an e-copy of Lady Lilias and the Devil in Plaid.
*Must be 18 or older