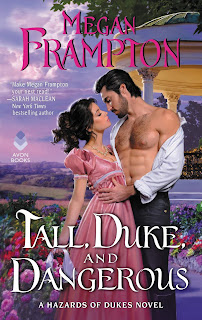 He needs a bride…

Nash, the “dangerous” Duke of Malvern, has always bristled against the rules of English society. Hot tempered and fearful of becoming like his brutish late father, he lives a life of too much responsibility and too little joy. And although he’s vowed to never marry, a duke has a duty—and there’s only one way to get himself an heir and a spare. So Nash reluctantly takes a look around at society’s available young ladies to see who might be willing to put up with his one-word answers and frequent glowers.

She longs for love…

After the death of her father and wicked stepmother, Ana Maria goes from virtual servant to lady-in-training, and while society life has its benefits—gorgeous gowns!—its restrictive rules stifle her sprit. And when her independent actions put her in danger, her half-brother insists Nash teach her some self-defense. While most of London’s ladies find Nash intimidating, she only sees a man who needs introducing to all the joys life has to offer. So although officially they are coming together for fighting lessons, unofficially their physical contact begins to blur the line between friendship and begins to grown into something more…

Tall, Duke and Dangerous by Megan Frampton is the second book in her Hazards of Dukes series. This five-star book had me eagerly turning the page. Megan writes an emotionally draining story of two people born into adverse circumstances who forge a revolutionary love story.

Tall, Duke and Dangerous follows Nash, the Duke of Malvern and a former cinder-sweeping maid of all drudgery, Lady Ana Maria. As a friend to both her brother and cousin, Nash and Ana Maria have known each other since they were children. And their childhoods were far from happy ones. Nash’s father, a monster of a man and father, was both emotionally and physically abusive. Ana Maria, though the legitimate daughter of a duke, grew up in the shadow of a stepmother who kept her in the household as a maid! A real life Cinderella.

Nash feels protective of her as he would feel for any of his father’s by-blows who he has managed to locate and provide for. However, he finds he feels more deeply for her than anyone else in his life but she’s his best friend’s sister. He is a loner with so many walls built around him. His father isolated him from his family. His violent nature caused Nash’s mother to flee from home when Nash was very young. There was no way he would have been allowed to go with her.

Following the death of her father and stepmother, Ana Maria finds her new status in life difficult to accept.  She feels neither fish nor fowl as a lady in a household where she was a maid, though the ability to wear gorgeous gowns certainly is a plus. Her flare and joy in colors prompts her to really use that talent - that eye in design. Her cousin Thadeus, the new Duke of Hasford, lets her redecorate one of the parlors. She finds she loves the whole process and wants to build a business to forge her sense of independence.

Nash controls himself and is brief in both his relationships and in how he communicates with everyone around him. It’s a safeguard which Ana Maria recognizes and accepts as no one else has ever done. Ana Maria is determined to show Nash the joy of living. This exuberance for life lands her into more than one scrape from which Nash rescues her. The truth of the matter is that they rescue one another.