Review - - Her Night With the Duke

Her Night With the Duke
by Diana Quincy
Publisher: Avon
Release Date: September 29, 2020
Reviewed by PJ 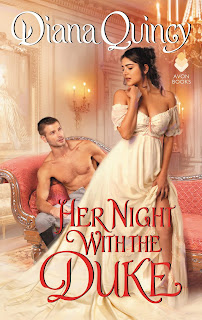 When Lady Delilah Chambers finds herself stranded at a country inn on a rain-swept evening, she’s forced to fend off a group of ruffians with the help of a handsome gentleman. Irresistibly drawn to each other, Leela and the stranger spend one reckless night in each others’ arms—and then go their separate ways. But the very next day Leela receives the shock of her life when she meets the duke who is set on wedding her beloved stepdaughter.

When it finds two destined hearts...

One night isn’t enough with a woman as fierce, fiery, and brilliant as Leela. Elliot Townsend, Duke of Huntington, cannot believe his good fortune when their chance encounter leads to an unforgettable evening of passion. Yet Hunt’s luck runs out when he is introduced to his prospective mother-in-law. Dowagers aren’t supposed to look like this...

Leela and Hunt are determined to keep each other at arm’s length, which should be easy enough for two intelligent adults with reputations to uphold. The problem is all logic is lost when it comes to a passion that refuses to be ignored.

What a breath of fresh air this novel is! With vividly depicted characters, emotional depth, fiery passion, and enough twists to keep me guessing until the very end, Quincy has penned a novel that captured my interest and kept me involved from start to finish.

Leela is a treasure. She is the heart of this book and one of my favorite romance heroines this year. I love her strength, her intelligence, and her hard-won independence. I love her adventurous spirit, her confidence in her value, and her refusal to accept less than she is worth. I especially enjoy how Leela embraces the heritage of her Arab mother that was denied her while growing up. This is an "own voices" novel with Quincy exploring the history, culture, and cuisine of the heritage she shares with her heroine.

I also love how Leela embraces the passion between Hunt and herself during their agreed upon night together, but places a higher value on the bond of love and trust she shares with her stepdaughter, Tori, once she discovers Tori is to become Hunt's betrothed.

Hunt is stunned by the passion he shares with Leela but bound to her stepdaughter by his honor, even though he barely knows the girl, as well as his determination to outrun his family's reckless reputation. His heart knows what it wants but his head, and stuffy English bias, disagree, especially after certain facts come to light. He has quite a growth arc in front of him if he has any hope of being worthy of Leela's love.

There are several colorful secondary characters who enrich the story but my favorite is Tori. What a surprise she is! Her relationship with Leela is not that of a typical fictional stepmother-stepdaughter. Instead of an adversarial relationship, these two share deep love, deep liking, and mutual respect. I love how they support one another, no matter what. It's not hard to see from whom Tori gained her unexpected independence and strength of character. I enjoyed her journey almost as much as I did Leela's.