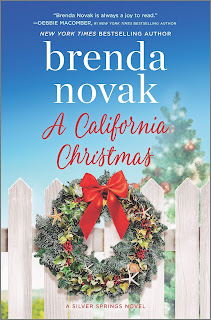 Up-and-coming TV anchor Emery Bliss can’t imagine anything more humiliating than the sex tape her ex revenge-posted online. That is, until it causes her to lose her job on top of her self-esteem. Seeking solace—and anonymity—in Silver Springs, Emery isn’t looking to get involved with another man any time soon. But when she’s thrown back into contact with Dallas Turner, she sees something that his many detractors have missed.Being home for the holidays and his adoptive mother’s wedding isn’t where mountain climber Dallas feels most comfortable. Thanks to his troubled childhood, he’d rather be on a rock face alone than trying to connect with people. Emery, however, makes him want to overcome his past…somehow.Both Emery and Dallas had been planning on a quiet, solitary Christmas, but the sparks between them are lighting a fire strong enough to last—possibly forever.
PJ's Thoughts:
This is one emotional story. Emery's ex-boyfriend/co-anchor has really put her through the wringer, personally and professionally. She's returned to Silver Springs to hide and to heal, not to begin a new relationship. Dallas has returned for his adoptive mother's wedding and isn't interested in a relationship either. Neither his career nor his past are conducive to letting anyone close to him emotionally. Physically, on the other hand...
I really liked these two together. I enjoyed the friendship they formed and the desire between them that threatened to erupt. I could feel Emery's shame and anger over what had been done to her. It was both healing and empowering to watch her regain her strength and dignity with Dallas's help. And Dallas. He's a good guy but so closed off. My heart hurt so much for the pain that little boy inside him had endured. If anybody deserved a happy ending, it was him.
Both Dallas and Emery were wonderfully complex characters that Novak slowly revealed to readers with a skilled hand. There's also a bit of a mystery woven into the story with a few twists I didn't see coming. There are also other relationship threads that I'm guessing are from earlier books in the series. I haven't read those books yet and at times I did feel as though I would have had a better understanding of Dallas's adopted family and their back stories had I already read those books. Which I plan to do now.
Posted by pjpuppymom at 6:00 AM