Cover Reveal - - So We Meet Again

Korean-American author, Suzanne Park took romance by storm with her 2020 debut, Loathe at First Sight. Helen Hoang, author of The Kiss Quotient, said of Park's debut rom-com: "Bursts with humor, heart, and great energy. I loved it! Park is a hilarious new voice in women's fiction."
Park's second novel, So We Meet Again, is scheduled for release on August 3, 2021. From the blurb, it appears to have all the makings of another smart and sassy, workplace romance.
So We Meet Again
by Suzanne Park
Publisher: Avon
Release Date: August 3, 2021 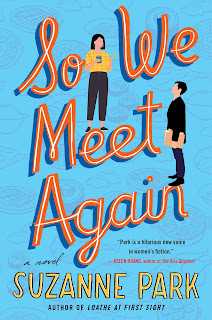 When up-and-coming investment banker Jess Kim is passed over for a promotion, laid off in a virtual meeting, and then overhears why (“she’s already being overpaid anyway for a woman” and “Asians are worker bees, not someone who can drum up new deals”) she delivers an “eff you guys” speech and storms out of the building. Not sure what’s next, she moves back home to Tennessee with her domineering Korean mom, who tries to set her up with her pastor’s son Daniel Choi, an M&A lawyer by day and a successful video game streamer by night. Turns out he’s swoony and smart, not the awkward preacher’s kid she remembers. With his help, Jess launches a Korean cooking YouTube channel focused on easy meal prep for busy professionals. All is going well until her mom walks on the show mid-live recording and argues about cooking technique. While she hates being berated by her mother in front of the world, it actually works in their favor—they go viral!

Soon her cooking channel becomes an actual media company and brand. When a client is suddenly interested in buying Jess out, she finds herself sitting across the table from the very investment firm she quit not so long ago. But there’s just one other problem: Daniel, the guy whose been helping her and that she’s been falling for, is the firm’s new general counsel.