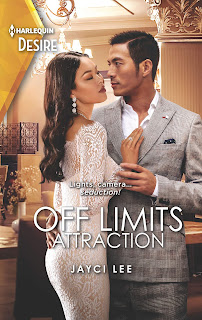 Mixing business with pleasure changes the entire script…But that’s no reason to stop…Jihae Park’s icy heiress facade is quickly melting—all because of Colin Song. A fling with the sexy film producer could jeopardize her one shot at achieving her own success—and the movie they’re making together. But resistance to her searing attraction—and Colin’s breathtaking bedroom skills—proves futile. Even as Colin’s ulterior motives threaten to destroy their chance at a picture-perfect ending…
PJ's Thoughts:
I have fallen in love with Jayci Lee's Song family but Colin and Jihae, with their off limits attraction, are my favorite of the group. I began their story with preconceived opinions about both Colin and Jihae, based on events from the two previous books, but quickly realized there was much more to both of these characters than their surface personae would indicate.
I enjoyed how Lee showed the dichotomy between the Jihae that is the creation of her controlling parents and the fiery, ambitious, and fun-loving woman longing to break free. The reader knows almost immediately who this woman really is but the struggle to claim her own destiny is compelling and brings an added depth to her story.
Colin matches her with his own ambition and determination to prove himself to his family. It gives them a common bond though it also presents an obstacle to their potential happiness of which Jihae is unaware. Having to walk that fine line between passion and loyalty brings a compelling uncertainty to their gradually deepening relationship that will force Colin to make some difficult decisions but, perhaps, will result in him attaining his heart's desire.
Lee brings steam, humor, and her rich cultural heritage to this third story in her Heirs of Hansol series. I've enjoyed getting to know the Korean-American Song family and learning more about their traditions. The characters, both primary and secondary, are vibrant, complex, and add richness to the story. I've especially enjoyed Grace Song, the grandmother and matriarch of the Song family.
Off Limits Attraction can be enjoyed as a standalone but I enthusiastically recommend all three books in the series, including Temporary Wife Temptation (book one) and Secret Crush Seduction (book two).
Posted by pjpuppymom at 12:30 AM