Review - - All the Colors of Night 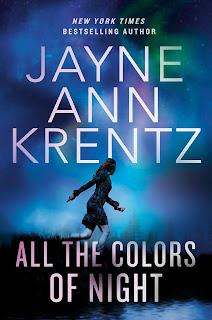 North Chastain possesses a paranormal talent that gives him the ability to track down the most dangerous psychic criminals. When his father suddenly falls into a coma-like state, North is convinced it was caused by a deadly artifact that traces back to the days of a secret government program known only as the Bluestone Project. North knows his only hope of saving his father is to find the artifact. He is good when it comes to tracking down killers, but to locate the relic he’s going to need help from a psychic who knows the shadowy world of obsessive collectors, deceptive dealers and ruthless raiders.… With her reputation in ruins after a false accusation, antiques expert Sierra Raines is looking for a fresh start. She turns to the murky backwaters of the paranormal artifacts trade, finding and transporting valuable objects with a psychic provenance. When North Chastain approaches her for help, Sierra takes him on as a client, though not without reservations. North represents the mysterious Foundation, the secretive organization established to police the underworld populated by psychic criminals and those, like Sierra, who make a living in the shadows of that world. North and Sierra soon find themselves at the scene of the Incident, which occurred decades ago in Fogg Lake. The town and its residents were forever changed by the disaster in the nearby Bluestone Project labs. The pair unearths shocking truths about what happened that fateful night, but they are playing with fire—someone in town knows what they’ve discovered and will do anything to make sure the secrets stay buried.
PJ's Thoughts:
I had set aside a week to read this second book in Krentz's Fogg Lake trilogy, thinking I'd read a chapter here and a chapter there in between my many holiday tasks. It was a good plan...until I opened the book. I finished it in one day. Cover to cover. The whole book. That's how good it is.
Sierra and North have earned a place among my all-time favorite Krentz couples. Individually, they're likeable, admirable, and have my utmost respect but, as a team, they're unstoppable. I loved them! Their chemistry was intense and organic but developed slowly as their primary focus was on their mission. I enjoyed the respect that developed as they worked together and the fact that sometimes Sierra took the lead while, at others, it was North. They created a true partnership and I was with them, cheering them on, the entire way.
Another aspect of the book that I enjoyed was Krentz's ability to create a paranormal community and make it seem everyday normal. These characters, with their psi talents and energy manipulation, became real to me as did the challenges they faced. Krentz's detailed, vivid descriptions not only brought the characters to life but the forests, caves, hidden labs, and night colors as well. By the time I finished the book, she had convinced me that a trip to the Pacific Northwest should, of course, include a little side trip to Fogg Lake...only in the daylight, of course, when the green fog subsides. But later, under a clear midnight sky, how I would love to have the ability to see all the colors of night.
The story itself is tightly woven, fast paced, and expertly filled with enough well-placed twists to keep me eagerly turning pages to discover what surprises awaited around the next turn of the page. And there were surprises in abundance along with one final twist that, I have to admit, I did not see coming.
All the Colors of Night is book two in the Fogg Lake Trilogy but stands well on its own. However, once you get to know these characters and the secrets of Fogg Lake begin to reveal themselves, there's a good chance that you will be scrambling to get a copy of book one: The Vanishing. Like I did.
Posted by pjpuppymom at 1:30 AM