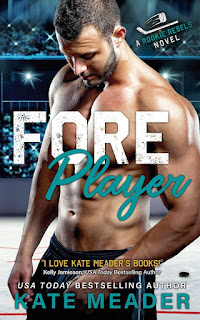 After a very public breakup and a viral post that declares him the villain, power forward Cal Foreman is taking a timeout from women and relationships to focus on hockey. When Chicago Rebels captain and old friend, Vadim Petrov, “volunteers” him to help train Vadim’s sister Mia, Cal figures he can do a favor for a pal and get ready for the season with his new team. But the imperious Russian would slice a skate blade through Cal’s internal organs if he knew what lessons Mia really wants.Yeah, not that kind of stickhandling.Hockey phenom and Olympics hopeful Mia Wallace needs help seducing the man of her dreams. That man is most definitely not Cal Foreman: notorious playboy, thorn in her side, and her brother's bestie. But surely a guy with his reputed skill set has a few tips on how she can nail her target—which makes him the perfect foreplayer.Cal knows Mia sees him as merely the warm-up act in her grand plan to win another man, but as they spend more time together, he wonders if that’s enough.If they could be more.And if he could convince her he’s worthy of the starting line-up . . . in her heart?
PJ's Thoughts:
I loved this book so much! After the gut-wrenching intensity of the last book in the series (Man Down), I was ready for a lighter tone and Foreplayer more than fills that need. That's not to say there isn't a satisfying depth of emotion or the complexities that make Meader's characters feel so real. There's all of that, as well as life-altering, emotional journeys for both Mia and Cal. The hidden baggage each of them carries is pretty significant but there is also a wonderfully delicious friendship that develops between them with snappy banter, witty humor, tenderness, and chemistry that begins with a flicker and grows until it flames out of control.
I loved how much fun they had together, how they challenged one another, how they had each other's backs, how they each eventually learned to see themselves through the other's eyes. I was totally invested in each of them as individuals and head over heels for them as a couple. My heart ached for them when the wounds of the past held them back from voicing their feelings, held them back from fighting for what they deserved. Of course, that made the end of their journey all the more sweet and satisfying and I could not have loved it more.
Kate Meader continues to impress me with her impeccable storytelling, laugh-out-loud humor, sizzling chemistry, and rock-solid romance. Her characters are beautifully crafted, with realistic flaws that make them both frustrating (at times) and endearing (at others). I adore the camaraderie and familial vibe among the members of the Rebels franchise. Having been part of a hockey team's inner circle I can say with certainty that Meader nails that aspect of these stories. I have loved every story in this series and am already looking forward to the next Rebels couple to benefit from her guiding hand.
As one who has read every book in this series, it's always fun to catch up with earlier couples as well as watch the ever-evolving friendships among the team. However, Meader has written each of these books in a way that they can be fully enjoyed on their own. However, if you're anything like me, once you meet these characters you'll most likely be burning to read all of their books. They're just that good.
Posted by pjpuppymom at 1:00 PM