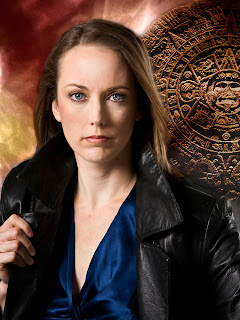 Jessica Andersen is the bestselling RITA and RT nominated author of more than twenty Harlequin Intrigues and the Nightkeeper Novels, a hot paranormal series that sexes up the 2012 doomsday. A native New Englander, she got a PhD in genetics and passed the Patent Bar exam before taking a left-hand turn into life as a romance writer. Please welcome Jessica to The Romance Dish as she dishes about....

Hey! Author Jessica Andersen here, thanking the Romance Dish for having me on today, and thanking you for joining me to dish about Demonkeepers! All comments will be entered to win a signed copy of the book!

First, a little bit about the Nightkeeper novels and Demonkeepers:

In the last few years before the 2012 doomsday, the magic-wielding Nightkeepers must find and win their destined mates in order to protect the barrier that forms humanity’s last line of defense against ancient Mayan demons.

Demonkeepers is the story of Lucius, an Indiana Jones wannabe who never quite measures up, until a twist of magic brings him powers beyond belief … and reunites him with Jade, the one-night stand he never forgot. As the two race to rescue the sun god himself from the underworld, they learn that kicking ass isn’t enough. They’ll need all their brains and skill—and the long-denied love that burns between them—to foil the dark lords’ plot.

I love these books—I write the stories I love to read—big and fat, with lots of action and romance. But I’m often asked: Who is the easiest character for you to write?

I guess that although that can differ from book to book, I would have to say that the two voices that have always come the most naturally to me are been Lucius and Rabbit.

Rabbit is a favorite of mine because he’s a walking example of Murphy’s law. Anything that can go wrong will go wrong if Rabbit is involved. Since that’s my M.O. most days, he’s got a special place in my heart. I also love that he’s got the guts to say things that I would think, but not say. He’s got a temper, a mouth, and a girlfriend I’m not sure I trust yet. And I can’t wait to see what he does next!

In contrast, Lucius doesn’t have much of a temper or a particularly foul mouth … but I relate to him because he never really fit in, and although he has mostly outgrown tripping over his own too-big feet, he always falls back on his inner geek when threatened.

Or at least he used to. In Demonkeepers, an ancient spell helps him become the warrior he’s always wanted to be … but that comes at a price that threatens not only Lucius and the woman he comes to love, but the ecological fabric of the earth itself. 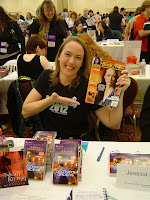 Since I’m a foot-tripping-over geek myself, Lucius’s voice has always come naturally to me, making it particularly fun (and, depending on where I was in the book, heartbreaking, terrifying, and uplifting) to write this book.

So, to celebrate the release of Demonkeepers, I’m asking you to tell me who your favorite character is from the Nightkeepers’ series, ask me a question, or just say “Hey!” All comments are entered to win an autographed copy of Demonkeepers, which hit stores yesterday!

For more information on the Nightkeeper novels, along with excerpts, extras, and other fun stuff, please check out http://www.jessicaandersen.com/.
Posted by Andrea at 12:07 AM