Review - - Nothing But Trouble

She’s back and better than ever! Another funny, sexy, steamy hockey book from 2009 RITA-Award-winning and NYT Bestselling author, Rachel Gibson hits the stands April 27th and it’s terrific! 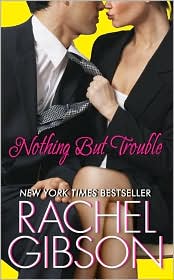 Chelsea Ross’s acting career has been a total bust. The closest she ever came to stardom was her brilliant performance as “Pretty Dead Girl #1.” But leaving Hollywood to become the personal assistant to a famous hockey player could be her stupidest career move ever.

Injured superstar Mark Bressler’s glory days are over. The bad-boy ex-jock could at least be civil to the pint-sized, pink-haired bombshell who the Seattle Chinooks hired to be his P.A. If Chelsea didn’t need the money, she’d be running from the world’s biggest jerk as fast as her feet could carry her.

Mark Bressler has spent his entire life working toward one goal: winning the most prestigious award in professional hockey - the Stanley Cup. Captain of the Seattle Chinooks, Mark and his team are well on their way to achieving that goal when a patch of black ice that sends Mark’s car careening out of control leaves him lucky to be alive but ends his hockey career forever. Now, the bitter, brooding man, who more closely resembles an angry, injured bear, secludes himself at home, watching his teammates hoist the cup without him while sending every home health nurse the team assigns to him heading for the hills. Until the day she arrives.

“Have you eaten lunch?”
He moved across the marble floor to the stainless-steel refrigerator. He opened it up and pulled out a bottle of water. “No.” Short and perky had never been his type. “Have I met you before?”
“Do you watch The Bold and the Beautiful?”
“The what?”
She laughed. “If you’re hungry, I could make you a sandwich.”
“No.”
“Even though I don’t officially start until tomorrow, I could manage soup.”
“I said no.” He tilted the water to his lips and looked at her over the end of the clear plastic. The bottom of her hair really was a weird shade. Not quite red and not quite pink, and he had to wonder if she’d dyed the carpet to match the curtains. A few years ago, a Chinooks’ fan had dyed her pubes blue and green to show her support. Mark hadn’t seen the woman up close and personal, but he had seen the photos.
“Well, you just turned down a once-in-a-lifetime offer. I never cook for my employer. It sets a bad precedent, and to be totally honest, I suck in the kitchen,” she said through a big grin, which might have been cute if it wasn’t so annoying.
God, he hated cheerful people. Time to piss her off and get her to leave. “You don’t sound Russian.”
“I’m not.”
He lowered the bottle as he lowered his gaze to her orange leather jacket. “So why are you dressed like you’re just off the boat?”
She glanced down at her dress and pointed out, It’s my Pucci.”
Mark was pretty sure she hadn’t said “pussy,” but it had sure sounded like it. “I’m going to go blind looking at you.”
She glanced up and the corners of her blue eyes narrowed. He couldn’t tell if she was about to laugh or yell. “That’s not very nice.”
“I’m not very nice.”
“Not very politically correct either.”
“Now there’s something that keeps me awake at night.” He took another drink. He was tired and hungry and wanted to sit down before he fell down. Maybe nod off during a court TV show. In fact, he was missing Judge Joe Brown. He pointed toward the front of the house. “The door’s that way. Don’t let it hit your ass on your way out.”
She laughed again as if she was a few bricks short. “I like you. I think we’re going to get along great.”

From the moment Chelsea enters the story, the electricity between her and Mark leaps from the page.  First adversaries, then so much more, watching them face off against one another is the most fun I've had in ages.  With banter that is witty, snappy and non-stop, I found myself glued to the story from beginning to end.

In Chelsea Ross's life, it's all about the boobs and she's tired of it.  Tired of the sore shoulders and aching back.  Tired of being cast in roles based on her cup size rather than her acting ability and of being hit on by her employers.  After explaining to her latest boss that blow jobs are not part of her job description, she leaves LA for Seattle where her twin sister lands her the job as Mark Bressler's personal assistant, a position Mark neither requested nor wants.  But Chelsea is determined to convince him that he needs her services because, no matter how arrogant, condescending or downright obnoxious he is, Chelsea is there to stay for the agreed-upon three months.  At the end of that time, she'll collect her $10,000 bonus from the Chinooks, have the breast reduction surgery she's wanted for years and head back to Hollywood where, finally, she hopes to be taken seriously as an actress.  But plans change, feelings grow and now Chelsea must figure out a way to explain the bonus to Mark without him thinking that she's stayed with him solely for the money...just like his ex-wife.

Although I'm an admitted sports junkie who loves football and hockey, you don't have to be a fan of sports to be a fan of this book.  Anyone can relate to someone who is facing the loss of their life's dream. I adored the pairing of Mark and Chelsea.  To throw this short, spunky, slightly off-beat whirlwind into the life of a grouchy, down-in-the-dumps, injured jock and acknowledged womanizer is pure genius...and pure pleasure.  I also appreciated the fact that Gibson didn't tone down the language or the realities of a professional athlete's life in deference to gentler sensibilities.  She accurately reflects the locker room talk between athletes (anyone with sons or brothers will recognize the juvenile humor they never seem to outgrow) without overdoing it or making it gratuitous and the acceptance of the sexual favors that are theirs for the taking (only the singles accept).  While our news headlines are filled with stories of professional athletes who cheat on their wives, Gibson's heroes reflect the other side of the coin:  those athletes who have a respectful, protective, all-consuming love for the one special woman who holds their heart.  Fans of the Chinooks will enjoy catching up with characters from previous books as well as meeting new ones who I fervently hope will one day have their own stories told.

Now is the perfect time to step onto the ice and take a spin with one of Rachel Gibson's hot, sexy hockey heroes.  I highly recommend Nothing But Trouble!