Laughter can take many forms, from the pure delight of a happy child to the gibber of madness. The laughter that slithered out into the dark and misty Dover night was the sound of cruel men with a victim in their clutches.
It caused the man in the street to pause. 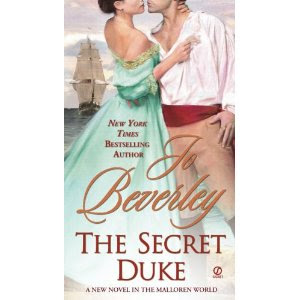 This opening to Jo Beverley’s 36th book (not counting novellas) caused me not to pause but to read on eagerly.

Youthful folly led Bella Barstowe into a danger from which she resourcefully escapes, only to find herself in another situation that threatens consequences almost as dire as those she averted. Captain Rose reluctantly recues Bella, who again proves herself an enterprising heroine. She steals her rescuer’s horse and returns home, leaving a baffled and concerned Captain Rose to return to his life, a world away from the low tavern where he had encountered a troublesome chit.

Four years pass, and help from an unexpected source once more allows Bella to escape, this time from a home as joyless and cold as a prison. Since her ruined reputation has destroyed the life she might have had, she disguises her attractions and adopts a persona that will allow her to create a free, if limited, life. The disguise as the plain Bellona Flint with radical sympathies leads to other disguises. One of these indirectly leads to the truth behind the danger that almost destroyed her four years earlier. Determined on revenge, she seeks out the infamous Captain Rose, the only man she knows who may be able to help her.

Bella is unaware that the man she knows as Captain Rose is really the Duke of Ithorne, whom she has met at a masquerade when both wore disguises. Thorn, as he is known to his intimates, assumes the role of Captain Rose (who is really an alternate identity of the Duke’s bastard half-brother, who bears a marked resemblance to the Duke) when he is weary of his ducal responsibilities and hungry for adventure and the freedom of the sea. Bella asks the real Captain Rose for help. He delays and lets Thorn know that the horse thief has returned. Thorn as Captain Rose agrees Bella deserves vengeance, and the two become allies. Then they fall in love.

The Secret Duke is the third book in Jo Beverley Rakish trilogy, a series set in the Georgian world of the Mallorens. Thorn is the character who links the three books. He is the cousin of the irrepressible Robin Fitzvitry, the Earl of Huntersdown (A Lady’s Secret) and the foster brother of Christian, Major Lord Grandiston (The Secret Wedding). As the titles indicate, the keeping and the uncovering of secrets is the overarching theme of this trilogy. All three books are also road books, at least in part. Both predispose me to like this book, plus it’s a Jo Beverley book. I’ve been reading and delighting in her books since her first, Lord Wraybourne’s Betrothed, in 1988.  It’s not necessary to have read the earlier books to understand this one, but appreciation of the world and of secondary characters will be considerably heightened for readers familiar with the other books set in this world, particularly the other Rake books.

Beverley has always been known for her attention to historical detail, and The Secret Duke is true to Beverley form. Even the most careless reader of European historicals knows the importance of an unmarried woman’s reputation among the upper class. Bella Barstowe’s story reveals what could credibly happen to a young woman who loses her reputation and her family’s support and refuses a marriage that repulses her. The Duke of Ithorne’s story shows an aristocrat born to be an adventurer but bred to accept the estate and political responsibilities of his rank. Bella and Thorn are humanly flawed. They don’t always choose wisely, but their mistakes are believable—and forgivable—because they are logical given these characters and their realities. Neither does Beverley gloss over the fact that however much Bella and Thorne love each other, a marriage between them will be a misalliance with potential consequences affecting future generations.

Despite clear strengths, The Secret Duke was not a five-star read for me. All the layers of disguises become a maze in which a reader can easily become lost. Some coincidences seem too contrived, and Bella, who is 21 for most of the book, sometimes seems far younger. But these are minor faults in a book that gives me endearing characters, historical accuracy, and thematic sophistication. Then there are the glimpses of familiar characters from other books and a final chapter that I read and sighed over three times. The Secret Duke may not be my favorite Jo Beverley book, but I never met a Jo Beverley book I didn’t like. This one was no exception.

~Janga
Just Janga
Posted by The Romance Dish at 12:05 AM