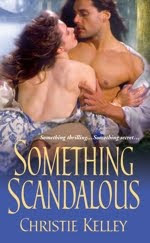 As the daughter of the Duke of Kendal, Lady Elizabeth has always been confident of her place in her family and in society. But, with the late Duke’s stunning deathbed confession, Elizabeth’s world is turned upside down. Suddenly, she is faced with the fact that everything she believed about her parentage is a lie and unless she can find her mother’s diary before the new Duke of Kendal takes possession of her home, Elizabeth may never know who her real father is.

Having lived in America for the past twenty years, William Atherton knows exactly who he is and it’s not some bloody English peer. Arriving in London with his seven younger siblings, the new Duke of Kendal has one goal: to sell off the ducal assets as quickly as possible and return to Virginia to claim the woman he plans to marry before her wealthy father marries her off to someone else. Unfortunately, as Elizabeth not so delicately informs him, carrying out that plan won’t be quite as easy as William assumes.

In Something Scandalous, Kelley has matched a man who is an American patriot through and through with a woman who devoutly believes in the sanctity of the English peerage. As you can imagine, there are many obstacles to overcome on the road to their happily ever after, not the least of which is the woman from America who, after finding reasons to delay accepting William’s marriage proposals for years, suddenly arrives in London ready to become his duchess.

While there is plenty of humor in this book and wonderful banter between the characters, especially in the first half as William and his siblings adjust to life in England and Elizabeth adjusts to having them overrun her household, there is also a great depth of emotion. When the foundations of your life have been shaken, as happens to both Elizabeth and William, your actions are sometimes sent careening out of control. Kelley deftly handles delicate situations without glossing over some harsh realities while also showing us that it takes a special person, a deep and abiding love and a willingness to accept someone for who they are, not who you want them to be, to emerge from the fire stronger, happier and united.

Lead characters from the two previous books in this series, Every Night I’m Yours and Every Time We Kiss, make appearances in this book. I always enjoy catching up with couples from other stories and Kelley gives us glimpses into their current lives without allowing them to infringe on William and Elizabeth’s story. We also see more of Lord Somerton (Can’t wait to read his story!), learn a few secrets, and are left with an epilogue that has me salivating for the next book in the series.

Kelley continues to delight readers with each book she writes. I can’t wait to see what she has in store for us next.  In the meantime, I'll be re-reading the very enjoyable Something Scandalous.