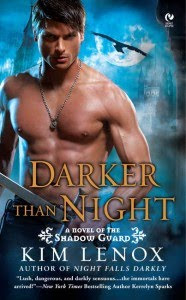 The Shadow Guards--a mysterious order of immortals entrusted with the destiny of the living--have been called upon to reclaim the souls of the most wicked and depraved of Earth's mortals.


Countess Selene, daughter of Cleopatra and sole female Shadow Guard, lies sleeping under a spell in the Tower of London. She made the ultimate sacrifice to save her twin brother, Mark (see So Still The Night) by absorbing the evil that was beginning to consume his soul. Placed under a spell to ensure everyone's safety, she is being watched for any signs of Transcension--the madness that possesses the evil mortals of Earth. Selene is being guarded by the Raven warriors and the enigmatic Ravenmaster, Rourke, Lord Avenage. One night, she awakens in a dark alley in London, a blade in her hand and a dead prostitute at her feet. Fearing that she has succumbed to the pull of evil, she is stripped of all power and authority as a Shadow Guard and is sent to the country to be watched over by Rourke.

Rourke is less than pleased about being ordered to continue to guard Selene. But what annoys him the most is his attraction for her. She occupies his every waking thought and haunts his dreams each night. Even though he wants nothing more than to give in to the burning need to possess Selene, Rourke will not let himself. He is tortured by the secrets of his past; secrets Selene is determined to uncover. Because Selene's thoughts are also consumed by Rourke as his are by her. As they fight their growing feelings while they are sequestered at Swarthwick, Rourke's estate, evil is watching them, ready to strike. If Selene and Rourke are to prevail in the battle, they must open up to each other and learn to trust. Their immortal souls and the fate of mankind are at stake.

In this third installment of her Shadow Guard series, Ms. Lenox ups the ante as danger stalks Selene and Rourke at every turn. I've been a fan of this series from the beginning, and I've been waiting for Selene's story . While Darker Than Night can be read on its own, readers will enjoy it even more if the series is read in order. Selene and Rourke have great chemistry, which they fight, and thank heavens they lose that battle! Rourke is my favorite kind of hero: dark, sensual, tortured and full of angst. He's just waiting for the woman who can make him whole again. *sigh*


"I'll break you." The softly spoken words touched her. They indicated that despite the pain he had inflicted on her, he cared.

"If this immortal life has not broken me by now, Rourke, it cannot be done."

After a long silence, he shook his head. "I won't make my pain your own."

If you're a fan of stories with a gothic feel, an emotionally tortured hero, a strong heroine and great secondary characters, Darker Than Night is definitely for you.