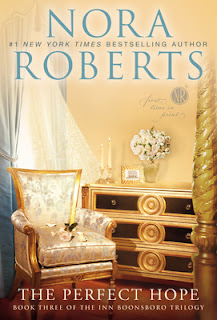 The Perfect Hope is the last book in the Inn BoonsBoro trilogy by Nora Roberts set in the beautiful town of , . This one features the oldest brother, Ryder. He, along with his brothers and mother, have completely renovated and opened Inn BoonsBoro, a picturesque bed and breakfast located in the heart of the square. In the first book, The Next Always, Justine Montgomery hires Hope Beaumont practically on the spot for the innkeeper position. Ryder was opposed to how quickly it was done, especially since Hope was the first (and only) person his mother interviewed. But Ryder has since had to eat his words, so to speak, because Hope has done a terrific job running the inn.


Hope is no stranger to the job—after all, she efficiently managed an upscale hotel in the middle of for years. The only reason she isn’t still there is because her romance with the hotel owner’s son fell flat after she discovered he had cheated on her. Coming to Boonsboro and landing the innkeeper position was the perfect solution as she had friends there and she liked the small town atmosphere. Everyone seems glad that she was hired...everyone except for surly Ryder Montgomery. Hope is not sure how to read him—one minute he’s snapping at her and the next he’s looking at her like he’d like to jump her bones. She decides to take matters into her own hands and find out what his deal is when a blast from her past arrives on the scene.


The Perfect Hope is a wonderful addition to the series and is my favorite of the three books. It has two things I love—an “enemies to lovers” type theme and a churlish, but loyal, bad boy hero. There’s just something about a hero with an attitude that is incredibly sexy to me. Justine Montgomery perfectly describes her son to Hope during one scene in the book:


“He’s a good man, like I said. A Clever one. Smart, hardworking, and he tells the truth whether you like it or not. If he’s not going to tell the truth, he doesn’t say anything. He’s got a sweet side that doesn’t always show, and a surly one that too often does.”


Ryder and Hope are total opposites who constantly spar with words yet can’t seem to completely deny their mutual attraction. They shared a New Year’s Eve kiss in the previous book which really sparked the sexual tension between them. Neither is looking for anything permanent, but as we know, that’s when love usually finds you. I enjoyed watching them give in and fall for each other. With a title like The Perfect Hope and a heroine with the same name, readers might infer that Hope is supposed to be “perfect”. I assure you she is not, though she is perfectly matched with Ryder.


The previous couples and secondary characters are in this one, including the inn’s resident ghost, Lizzy. She figures more prominently in this one as Hope and the others are closing in on solving her mystery.


If you’re a fan of Nora or if you just love small town contemporary romance, The Perfect Hope is a book you are sure to enjoy!