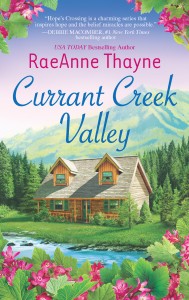 Spring has arrived in Hope’s Crossing, Colorado, and Alexandra “Alex” McKnight should be happy. The town’s historic old firehouse has been transformed by renowned architect Jackson Lange, Alex’s brother-in-law, into the newest jewel in Brodie Thorne’s chain of restaurants, and, after years as sous chef in someone else’s kitchen, Alex’s dream of being executive chef is about to come true. She refuses to admit even to herself that this dream job might not be enough to fill the emptiness in her life, an emptiness that persists even though she enjoys close ties with her family and a host of friends. Denver contractor Sam Delgado, hired by Brodie to complete Brazen’s kitchen in time for the restaurant’s late May opening, might be just what she needs. He meets all her criteria for a relationship: he’s gorgeous, he’s sexy, and he’s in Hope’s Crossing for only a few weeks.

Sam’s business in Denver has tanked after his former father-in-law was sentenced to prison for illegal business practices, thanks to evidence provided by Sam’s whistle-blowing. Ex-Army Ranger Sam is looking for a new start, and Hope’s Crossing promises just the kind of safe haven he wants for himself and his young son. Alex McKnight might raise his temperature, but he does not need the complication she will bring. He needs to concentrate on building his business in his new town and on finding a home where he and almost-seven-year-old Ethan can sink roots and fully heal from the loss of his wife to cancer.

The chemistry that sizzles between Alex and Sam tests their resolutions to keep things light, and the fact that they genuinely like one another makes resistance tougher. When her feelings for Sam threaten her closely guarded heart, the fear and guilt Alex has hidden for years are powerful enough to send her running from Hope’s Crossing and the happiness she longs for but cannot believe she deserves.

Currant Creek Valley is the fourth book in Thayne’s Hope’s Crossing series, and it is as emotionally satisfying as the earlier books. Alex is introduced as the BFF of Claire Bradford and the youngest of Riley McKnight’s five sisters in Blackberry Summer, the first book in the series. Her light-hearted approach to life has hidden some painful secrets even from the closely knit McKnight clan. Readers familiar with the series will likely already have developed an affection for Alex, and the newly vulnerable Alex in this book is even more sympathetic. Sam is the best kind of hero—sexy, strong, and honorable with a great sense of humor and a heart totally committed to his son. Add a super smart, needy kid and a lovable stray Lab named for Alex’s favorite chocolate, and you have an irresistible story. Appearances by characters from other books and the culmination of a senior romance between Alex’s mother and the town’s “angel of hope” are the proverbial icing on a delectable cake.

I’m a long-time Thayne reader, and I think the Hope’s Crossing series is her best work. If you like small-town romances, I predict you’ll fall in love with Hope’s Crossing and its citizens. I’ve happily made my reservations for a return ticket in July for Willowleaf Lane and in October for Snowflake Canyon.