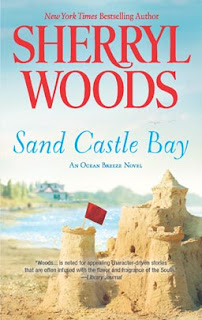 Emily Castle and her sisters, Gabi and Samantha, spent the summers of their childhood with their grandparents who lived in Sand Castle Bay, a small town in coastal North Carolina. It was there that fourteen-year-old Emily fell in love with Boone Dorsett, the neglected son of wealthy parents and an aspiring bad boy until his relationship with Emily made him part of the extended Castle clan. But Emily had big dreams that didn’t include settling down in Sand Castle Bay. Ten years ago she left to pursue those dreams, and Boone became the man in her past. She has achieved career success as an interior designer to celebrities and other wealthy clients, but her personal life has been on hold. Now, in the aftermath of a hurricane that damaged Castle’s by the Sea, her grandmother needs her, and Emily is on her way back to Sand Castle Bay where Boone has gone on with the life she refused to share.

Boone Dorsett owes Cora Jane Castle a lot. Her love and belief in him led him from a disastrous path when he was a teenager, and she has made him feel like family ever since. He understands that Cora Jane needs her granddaughters' help getting her restaurant running again and needs them even more as emotional support, but he is wary of Emily’s return upsetting the precarious balance of his life. After Emily dumped him, he married sweet Jenny Farmer who wanted nothing more than to be Boone’s wife and the mother of his son. A year after Jenny’s death, Boone is dealing with guilt because he never loved Jenny as much as she loved him. His top priorities are his eight-year-old son B. J. and his three restaurants. He doesn’t need Emily Castle making him remember feelings best forgotten.

It doesn’t take long for Emily and Boone to recognize that the fire that once burned so brightly has been banked rather than doused. Added to the mix is the bond that develops quickly between Emily and B. J. But Boone’s life is rooted in Sand Castle Bay, and Emily is even more invested in her career when she is offered an opportunity to make a real difference in the lives of women and children more than a thousand miles from North Carolina. Then, there are Boone’s former in-laws who are making noises about suing for custody of B. J. Are some obstacles too great for even love to overcome?

Sand Castle Bay introduces a new series from Sherryl Woods, who, with more than a dozen series to her credit, has ample practice in creating likeable characters who interact in a warm and friendly community. The Ocean Breeze trilogy promises more of the same. The conflict between Emily and Boone can be resolved with communication and compromise. The custody battle that concerns Boone is a toothless threat. Secondary characters include the workaholic father whose children feel deprived of his attention, the family matriarch with a penchant for interfering in the lives of those she loves, the lovable, inquisitive kid, and interesting heroines and hunky heroes-in waiting. These are all standard characters for Woods, and they all have a part to play in Sand Castle Bay.

Although Sand Castle Bay suffers in comparison to the best of Woods’s Sweet Magnolia and Chesapeake Shores books, fans of Woods who like the comfort of the familiar will probably enjoy the book. Readers who prefer their romances less predictable, more challenging, and with at least a sprinkle of spice may want to look elsewhere.