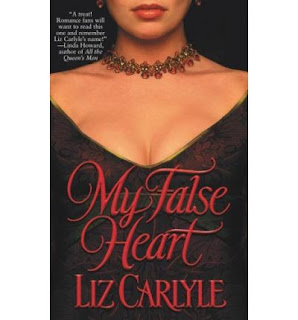 Liz Carlyle is one of my favorite historical romance writers. I was very late coming to her, but I've devoured nearly all her books since discovering her a couple of years ago with the marvelous THE DEVIL TO PAY.

With one exception. For quite a while, I've had Liz's debut romance MY FALSE HEART sitting on my bookcase. And for some reason whenever I reached for the next book to read, this one wasn't picked up. I wonder if it's the black cover!

Anyway, last Christmas, I had a little historical binge, including the first two of Liz's St. James Society series, ONE TOUCH OF SCANDAL and THE BRIDE WORE SCARLET. And of course, having read two great books by one great author, I looked around for another one and remembered (d'uh!) that I had MY FALSE HEART on the office bookcase.

Wow, what a fantastic story. MY FALSE HEART was published in November, 1999. It's long, closer in feeling to a Laura Kinsale like FLOWERS FROM THE STORM than to the quicker reads in style these days. Small print. No white space at the end of chapters. Over 450 pages. Definitely a feast of hearty roast beef and gravy rather than a quickly gobbled souffle.

Most of Liz's books are linked through the complicated extended family and social connections of the Marquis of Rannoch who makes an appearance in many of the later instalments, usually as an all-powerful eminence grise. While you get a bit of backstory in later books, it was nice to be in on the ground floor, so to speak, and see the marquis fall in love in the story that launched a thousand sequels (well, lots anyway!).

After a wanton coquette breaks Elliot Armstrong's heart when he's a naive young Scottish lord, fresh on the London marriage market, he sets out in a fury to make himself the worst of the worst. And he succeeds to a point where the world considers him ready to commit any and all sins.

Ten years later, he's on his way to break with his latest mistress when he becomes lost in the Essex fog and stumbles upon a house that seems to promise all the warmth and love and redemption that he has come to believe forever denied to him. And inside this house is a woman who lures him as no other ever has. Under false pretenses, he inveigles his way into talented artist Evangeline Stone's life and finds a place in her family and in her heart.

But what happens when she finds out that kind Mr. Roberts is really the notoriously dissolute Marquis of Rannoch? Not to mention that Evangeline has secrets of her own that place her and her loved ones in jeopardy. An entanglement with the most infamous man in England means danger and scandal for this innocent, yet strong woman. She's no pushover; she's smart and independent and she's used to managing her life. Rannoch needs to work hard to get his happy ending, especially once the cat is out of the bag about his identity.

The plot gallops along with twists and turns worthy of Dickens. There are murders and disappearances and duels. Not to mention a marriage of convenience, one of my favorite plot devices. And all the time, our libertine of a marquis is dragged kicking and screaming toward becoming a genuine hero. Loving Evangeline gives him his one chance at redemption, but he doesn't turn into an honorable man willingly.

One of the lovely things about a big feast of a book like this is that you have plenty of room for vivid secondary characters, many of whom go on to play major roles in later Liz Carlyle stories. One of my favorite ongoing characters is Rannoch's acerbic and very worldly wise valet Kemble. And we get glimpses of a whole batch of future heroes and heroines including Zoe, Rannoch's illegitimate daughter who has a wonderful romance later in WICKED ALL DAY (reviewed here: http://www.theromancedish.com/2010/03/wickedly-wonderful.html).

Another lovely thing about this book is that the descriptions of setting are so vivid, you really feel like you're wandering the foggy Essex marshes or the dark and dangerous streets of London. Again, the use of atmosphere to build the story is worthy of Dickens.

And of course there's Liz's wonderful trademark crescendo of sexual tension between the hero and heroine. She writes the complex dance of falling in love beautifully and you'll be entranced watching the wary, heartless marquis fall helplessly under the spell of a good woman. The love scenes are incendiary, hot and emotional and full of subtle character revelations.

OK, enough raving. You've probably gathered that I thoroughly enjoyed this book. I was really glad I had a free day when I could just wallow in its wonders. This is a big satisfying banquet for the historical romance lover.

So are you a Liz Carlyle fan? Do you have a favorite? Do you have any authors whose debut books really made you sit up and pay attention?