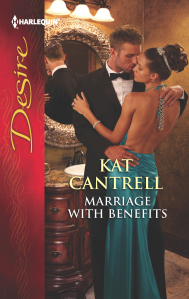 Cia Allende has a flawless plan.  In order to honor her late mother's dedication to the abused women and children of their city, Cia needs access to her trust fund.  Only with the money can she build a new shelter but her very traditional grandfather has the money tied up with restrictions.  Cia can only gain access when she turns thirty-five or marries.  Fortunately, Cia convinced her grandfather to add one more stipulation to the trust.  If her husband divorces her after six months of marriage, all the money goes to Cia.  So now, all she needs is a man who is willing to be a husband in name only, divorce her after six months and go his merry way.  Enter the perfect candidate:  Lucas Wheeler.

Businessman Lucas Wheeler is feeling the effects of some bad decisions.  Known as the carefree playboy of the family, a recent public affair with a woman who turned out to be married has severely damaged his business reputation and that of his family's commercial real estate company.  It has also made Lucas start to question his lifestyle and what he wants from life.  What he does not want is anything to do with the crazy proposition Cia, a woman he's never met, brings to him even though he's attracted to her beauty, intelligence and sass.  But then she dangles the perfect carrot:  exclusive rights to the property her grandfather wants to sell and a chance to repair his tarnished reputation with a stable marriage.  For six months.

I like marriage of convenience stories and Cantrell has written a good one.  Both Cia and Lucas enter their "business" marriage with a firm idea of how it will go and, of course, neither one is exactly right.  Cia, who has lived with her successful, no-nonsense grandfather since her parents were killed when she was a teen has outstanding business acumen but no good role models for a happy marriage.  Most of the marriages with which she's acquainted are those of the women she helps at the shelter; marriages broken by abuse.  She's determined to have a non-romantic relationship with Lucas and walk away unscathed at the end with her heart untouched.  Lucas has other ideas.  He figures they're going to be married for six months.  Why not have some fun along the way?  What they both discover is that they are each more than they realized and, together, they are a perfect fit.  Of course, that realization does not come quickly or easily but in Cantrell's skilled hands, it comes with humor, romance and plenty of heart.

Judging from this debut, I'd say Kat Cantrell has a bright future writing romance.  The second book from the 2011 Harlequin "So You Think You Can Write" winner and 2012 Golden Heart finalist, The Things She Says from Harlequin Desire was released March 5th.  I look forward to reading it.