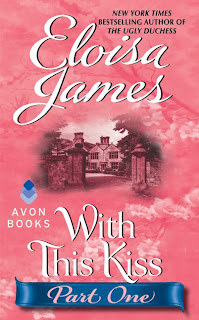 Lady Grace Ryburn has known Colin Barry her entire life.  Their parents are good friends; their fathers, cousins and former pirate partners. Grace, a quiet, intelligent and kind girl, has always held Colin in esteem but as an older brother or good family friend.  Until the summer twenty-year-old Colin returns from two years at sea:

The year Grace turned fourteen, Colin walked through the door in a uniform, and her heart gave one big thump and never beat exactly the same way again.

Colin Barry has always known he would need to earn his way in the world.  Adopted by Griffin and Phoebe Barry, Colin is not his father's heir but has always dreamed of following in Griffin's footsteps with a career at sea.  Four years in the Navy have taught Colin that while he loves the ocean, he has neither the heart nor the stomach for the fighting.  Grace determines to ease his time at sea by writing him letters filled with stories from home, many featuring Lily, Grace's two-years younger sister.  Where Grace prefers to be on the sidelines, Lily is the type of girl who loves being the center of attention, with a sparkling personality that draws people to her like bees to honey.  Her antics provide excellent stories to ease a young man's weary heart, especially when told by Grace, a young woman with a gift for writing and a special talent for drawing the sketches she includes with her letters.

By the time Colin returns home in 1836, Grace, at nineteen, knows exactly how she feels and what she wants.  She's fallen deeply in love with Colin and has convinced herself that he feels the same. While Lily has taken the ton by storm, Grace, quiet and uncomfortable with the whole process, chooses to observe on the fringes, out of the spotlight.  She waits for Colin and is certain that this trip home will change everything.  It does, but not in the way she thinks.

Colin's soul is filled with darkness and Grace alone knows the anguish he endures.  When he arrives at the ball the Ryburns are attending, Grace waits in her most attractive dress but when he enters, it's the brightness, the gaiety, the sparkle of Lily that lights the darkness inside him and draws him to her like a moth to a flame.  This time, when Colin returns to sea, he unknowingly, in the way of clueless males everywhere,  leaves behind a heartbroken Grace.  He eventually realizes his stupidity as well as his true feelings for Grace but by that time, Colin is far at sea.  Grace has waited for him all these years and he hopes - prays - that she will continue to do so and that he will continue to remain injury-free to return home to her.  But Grace, whose love for Colin is deep and pure enough to want his happiness above her own, makes a heart-wrenching decision, stepping aside, giving her blessing for what she believes he most wants, and finally moving on.  She meets a Scottish lord who courts her, appreciates her for all her wonderful qualities and who never, ever gives her sister, Lily a second glance...to be continued.

From the very beginning, Eloisa James captivated me with this story.  The characters, Grace in particular, are so richly drawn that I felt as though I was right there at the Barry's summer home and, later, in London, living it with them.  The relationships are complex, with twists and turns that keep the reader engaged and the cliffhanger will have you counting the hours until Part Two is released next week.  I say this almost every time I read an Eloisa James book but it bears repeating.  Ms. James has a command of the English language that flows across the page like the notes of a beautiful song.  I don't so much read her words as feel them, such as in the following excerpt where Colin awakens to the difference between Lily and Grace:

It wasn't Lily's fault that she wasn't as intelligent as her sister.  Nor as witty and kind.  That wasn't fair:  Lily was kind.  But she was shallow compared to Grace.

She was a waltz, and Grace was a hymn.

Will Colin make it home in time to convince Grace she belongs with him?  Will Grace be happier with her Scottish lord?  What will happen with Lily?  We'll find out in Part Two!

With This Kiss is a serial romance, published in three weekly increments beginning March 12 and continuing with Part Two on March 19 and Part Three on March 26.  Each part can be purchased in digital format or readers may wait and purchase a print version of the entire story (all three parts) on March 26.

What do you think of the serial format?  Will you be giving it a try or waiting for the complete story in a print version?  Have you read Part One of With This Kiss?  What do you think will happen next?  I'm giving away three copies of With This Kiss, Part One to random commenters.  (If you already have Part One, I'll substitute Part Two when it releases on March 19.)

Review copy received from Avon via Edelweiss in exchange for an honest review.