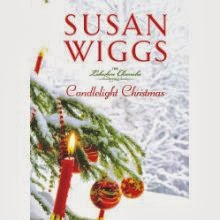 Sports marketing executive Darcy Fitzgerald is still recovering from the end of what was supposed to be happily-ever-after. When she married Huntley Collins, whom she had known forever, she was deeply in love with him, with his eight and ten-year-old kids, and with the idea of being a family; but her perfect husband cheated on her with his ex-wife, the children who loved Darcy turned into teens who hated her, and her HEA had a shelf life of five years. Darcy is still hurting, and while she hasn’t given up on the idea of a love that lasts, she’s not looking for the immediate future. She’s also determined to avoid involvement with any more single dads.  In fact, Darcy plans to remain childless.

Logan O’Donnell is dreading to see the summer end because it means his son Charlie will be returning to Oklahoma to live with his mother and step-father for the school year. It will be Thanksgiving before Logan sees Charlie again. Sometimes the irony of his having moved to Avalon so that he could be a daily part of his son’s life only to have his ex, Daisy Bellamy,  marry Air Force pilot Julian Gastineaux (Marrying Daisy Bellamy) and move away with Charlie gets to him. Logan was left with nothing to fill the empty months when Charlie was not in Avalon except sports and his insurance business that he finds increasingly boring despite its success. All Logan wanted was to be a family man. He still thinks about the sisters and brothers he’d like to give Charlie, but Logan’s romantic relationships seem to be strictly short-term.

Darcy and Logan meet when Darcy accompanies her friend India, Logan’s sister, to Camp Kioga for the closing ceremonies of the summer program run by Sonnet and Zach Alger. India’s twin sons, like Charlie, have been attending the camp, and India seizes the moment to introduce her single friend to her single brother. Neither Darcy nor Logan is interested in a relationship, but there is a definite attraction between them, one that intensifies when it becomes clear they share a sense of humor and a love for outdoor sports. Darcy even encourages Logan in his wild idea to buy a resort. But Logan avoids complicated women, and Darcy shouts “Complicated.” Darcy plans to stay far away from guys with kids, and it’s clear that Logan’s son is the center of his world. So they say goodbye, albeit with backward looks.

The Fitzgerald and the Collins families have spent holidays together since their children were small, but Darcy cannot face another holiday in the same room with her ex. Even the pleas of her older sister, who is married to her ex’s older brother, fail to change her mind. Instead Darcy accepts India’s invitation to spend Thanksgiving with the O’Donnell family in Paradise Cove, Florida, where she and Logan share some special moments, including kisses that leave them both wanting more. When India tells Logan that she’s invited Darcy to spend Christmas with the family who will gather at Saddle Mountain, the resort of which Logan has recently become controlling partner, he thinks it’s a grand idea.

Christmas at Saddle Mountain proves to be magical with snow and lights and a house filled with excited kids. Darcy finds herself more involved that she ever expected to be in all of Avalon’s Christmas happenings. Logan’s happiness at having Charlie with him again is multiplied by his joy in having his family join him in his new home. If Darcy and Logan can drop their defenses and learn to trust each other with all their vulnerabilities, such holidays just may become a family tradition.

Candlelight Christmas is the tenth book in Susan Wiggs’s Lakeshore Chronicles, and the third book that focuses on characters who were teenagers in the earlier books. I’ve been a fan of the series since the first book and a Susan Wiggs fan far longer, so, in the interest of full disclosure, I admit that I was predisposed to like this book before I read the first word. I expected a book that would expand the world of familiar characters, introduce some new ones whom I would find engaging, and offer a story rich in family dynamics and romance. Candlelight Christmas met all my expectations.

Fans of the series who watched Logan grow from a wild teenager rebelling against his controlling father into a young man determined to accept the responsibilities of fatherhood and who felt sorry for him (even if you belonged to team Julian) when his marriage to Daisy fell apart will be especially pleased to see Logan come into his own as the hero who finds his own HEA. Wiggs provides enough details of Logan’s past for readers who have not read the earlier books to understand the stages Logan has moved through to get where he is and to root for his happiness.

Darcy is also a likeable character, and from the beginning, it’s easy to see that she is perfect for Logan. Not only do they both understand what it means for the stable world they thought they had created to crumble, but they also share a love for sports that have an element of risk. Even more important, Darcy is the catalyst who reminds Logan of who he really is and gives him the courage to choose something he is passionate about for his life’s work, risks and all. And Logan provides the motivation Darcy needs to take emotional risks and claim the life she was meant to have.

But this book is not only a romance; it is also a book about families. One of the things I liked most is that this book humanizes Logan’s parents, especially his father who has been something of a bad dad in earlier books. In this one, readers see his mother and father as flawed human beings who make mistakes, as all parents do, but who love their son and their grandson. Logan interacts with his parents and his sisters and their husbands and children. The O’Donnells share history, traditions, jokes, and an unwavering love for one another. Readers see them as a family.

Wiggs also shows how divorce affects families, redefining who is and is not family. Darcy’s divorce created complications with her own family because they were so entangled with her ex’s family. She grieved the loss of her step-children long after she had recovered from her husband’s betrayal. Logan feels like an outsider when he takes Charlie to the Bellamy’s inn, a place where Logan had once been warmly welcomed as part of the family. Wiggs also shows the pain of parent and child separation and the tension between former spouses even in the case of divorce and remarriage where everyone involved loves the child and shares a commitment to his best interest. And all is not smooth sailing when Charlie realizes his dad and Darcy are interested in one another.

All of this is not to suggest that this tenth Lakeshore Chronicle fails as a Christmas book. It has all the holiday trappings and enough warm, fuzzy moments and thematic threads concerning love and giving to satisfy even rabid Christmas celebrants like me. For example, there is a poignant subplot involving two children for whom Logan assumes temporary responsibility. And for the true romantics, there is a wonderful scene where Darcy and Logan sneak out in a snowstorm to hang lights on an outside tree so that Santa will have a runway for landing.  I also liked seeing the family Thanksgiving gathering included.

In short, Candlelight Christmas succeeds as a holiday story and as a small-town contemporary romance. I thoroughly enjoyed this visit to Avalon, New York, and I recommend this book, and the series, to readers who like small-town settings with a complex tangle of extended family and friends.

Wiggs has never given a definitive answer as to how many books readers can expect in this series. I’m keeping my fingers crossed for at least one more. I want to see Max Bellamy happily settled. And Charlie, whom series regulars adored as an infant, is already ten. Maybe Wiggs will move on to third generation stories. After all, she did post that sketch on her blog that shows a woman reading Wheelchairs on Willow Lake: Lakeshore Chronicle #89. ;)