Guest Review - - A Change of Heart 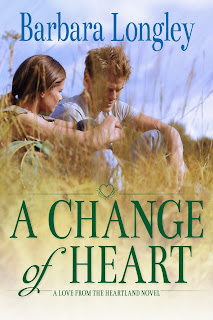 Cory Marcel has given up and withdrawn from life. She spent nearly a decade giving everything in her to a military career that she found fulfilling and that was proof to the world that she had transcended  her “trailer trash” past. But her proud record is nothing more than a tarnished memory since she went public and charged her commanding officer with rape. She may have won the case, but she lost her career, having been declared “unfit for duty.” Now she has returned to her mother’s trailer where she is surviving—barely--but not really living. Battling PTSD, she has lost her will to fight, her trust in people, and her hope that things will get better.

Brenda, her best friend since childhood, demonstrates tough love and forces Cory out of bed, into a shower, and eventually back into life. She even finds a job for Cory at Langford & Lovejoy Heritage Furniture in Perfect, Indiana, a firm that is becoming known for hiring veterans struggling with PTSD. Brenda’s brother is almost the only man Cory trusts, and since he is employed by Langford & Lovejoy, she agrees to take the job.

Ted Lovejoy is a founding partner of Langford & Lovejoy, but his dissatisfaction with being regarded as “the kid” and left out of significant decisions is growing. His ire goes vocal when he learns of the company’s latest hire about which he was not consulted. He is ranting at Noah Langford, his partner, about hiring Cory Marcel when a clearly vulnerable brunette walks in. Tender-hearted Ted is dismayed when he realizes the fragile woman is the new employee whose hiring he is protesting. He tries his best to make amends, but Cory’s fear of men is entrenched, and Ted finds it slow going.

At first Ted, who has a propensity to save maidens in distress, wants only to befriend Cory and reassure her that he is safe, but he soon finds his attraction to her and his desire for more than friendship make it difficult to be patient. Cory can’t help warming to Ted. Not only is he a good-looking guy who is making her aware of feelings she thought were dead, but the sensitivity he shows in installing a lock on her office door and in always choosing to seat himself with his back to the room so that none of the traumatized vets are forced into that uneasy position reassure her about the kind of man he is. Still, Cory’s wounds are deep, and for every step forward she takes with Ted, he feels as if they are taking two back. Can the patience of a man who is beginning to doubt that he will ever experience the kind of love his friends have found endure long enough for Cory to heal and embrace a life richer and more rewarding than the one of which she once dreamed?

A Change of Heart is the third book in Barbara Longley’s Perfect, Indiana series, after Far from Perfect (Noah Langford and Ceejay Lovejoy) and The Difference a Day Makes (Paige Langford and Ryan Malloy). I’m a fan of the series because Longley has presented the lingering problems affecting Afghanistan veterans with surprising depth and a refreshing absence of the sentimental clichés to which authors writing about such characters too frequently resort. I found the third book particularly interesting since the veteran is female and the traumatizing event occurs within the military circle. Longley shows her readers what Cory’s life is like after the headlines of a highly publicized case have faded and the victim is left with a ruined professional life and emotional trauma.

All of the characters in Cory’s story early on ring true—her mother’s helpless concern, her best friend’s refusal to let Cory give up, the reassuring presence of the brother, who was practically Cory’s brother too, a big, tough military hero with vulnerabilities and an unlikely childhood nickname (“Bunny”). Once the setting switches to Perfect, fans of the earlier books will enjoy seeing many familiar characters and the evidence that the HEAs of Noah and Ceejay and Paige and Ryan are in progress. Cory and Ted’s relationship seems real, and it demands the reader’s emotional investment.

A Change of Heart can be read as a standalone. Readers new to the series will have no difficulty following the development of Cory and Ted’s relationship. Cory’s fears, Ted’s determination, and the will of their friends to protect both their vulnerable hearts make this an engaging, heartwarming story. Readers who have followed the series will particularly enjoy seeing a more mature Ted finally find his own forever love.

If you are a reader who has an affection for small-town romances or for romances featuring veterans as characters, I think you will enjoy this book. I particularly recommend it for readers who love Susan Mallery’s Fool’s Gold series or JoAnn Ross’s Shelter Bay books.