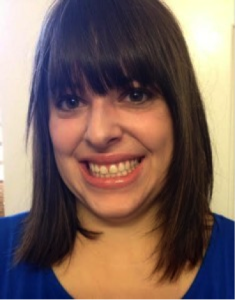 We're delighted to welcome debut author, Erica Monroe today.  Erica writes dark, suspenseful historical romance. Her debut novel, A Dangerous Invitation, Book 1 of the Rookery Rogues series, released in December 2013. She is a member of the Romance Writers of America, Heart of Carolina, and the Beau Monde Regency Romance chapter. Erica can also be found blogging every other Saturday at Teatime Romance. When not writing, she is a chronic TV watcher, sci-fi junkie, lover of pit bulls, and shoe fashionista. She lives in the suburbs of North Carolina with her husband, two dogs, and a cat.

1      Welcome to the Romance Dish, Erica and congratulations on the release of your first book.  Please tell our readers what they can expect from A DANGEROUS INVITATION.

A Dangerous Invitation is the first book in my new series, the Rookery Rogues, which revolves around denizens of the different London slums—or rookeries as they were called (coming from the word rook, which means to steal). ADI introduces you to a few of the secondary characters that will have their own stories later on, but primarily it is the story of estranged lovers Kate Morgan and Daniel O’Reilly.

Three years prior to the start of ADI (1829), Daniel is found at the scene of a brutal murder. He is arrested for that murder and then flees London so that he will not be hanged. When ADI starts, Daniel is now sober (though it’s a constant struggle) and wanting to prove that he was innocent of that murder. He returns to London to win back Kate’s heart, but he finds that she’s now living in the Ratcliffe rookery as a fence for stolen goods. She wants little to do with him.

Daniel and Kate are not the typical Regency hero and heroine (I like this!).  What would you like readers to understand about these two characters?

Daniel and Kate are in a sense both trapped in the past. Kate mourns her father, who died two and a half years prior, and her inability to move on and come to peace with his death holds her back. When she first becomes involved with Daniel again, it’s because she wants to make sure he doesn’t accuse her father’s old bankrupted company Emporia Shipping as being culpable in the warehouse laborer’s death that Daniel was accused of three years prior. At first, she has problems letting Daniel back into her life because all she can think of is the man he was before—not the man he’s become now.

For Daniel, he’s seven months sober and he’s trying so hard to cling to that shred of sanity and become a better man. When he was first with Kate, he was what we’d term today as a functioning alcoholic, using the gin to get through his heavy stress job at Kate’s father’s company. But when he left London, he flung himself completely into the gin to take away the pain of being without Kate. He’s at that precipice where he can either fall back into the man he hated again, or become something new entirely.

I’m  enjoying the darker tone and thread of suspense in A DANGEROUS INVITATION.  Should we expect the same in future books in The Rookery Rogues series?

This is definitely something readers can expect. There is a suspense plot in every one of the Rookery Rogues, though sometimes it plays a lesser role than it does in ADI. As for the darker, grittier elements, because these are errors fraught with peril and crime, it’s pretty unavoidable. I want to be authentic in showing the rookeries for what they were—both the hope of the people and the despair.

What authors provided your introduction to romance?  Who do you enjoy reading today?

At first, I read a lot of the frothy, happy societal romances like Julia Quinn writes. I still love those, but now I’ve turned more toward more emotionally-charged reads. I love Delilah Marvelle’s the Rumor series, and Meredith Duran is an auto-buy. I love Cecilia Grant’s books, Elizabeth Hoyt’s Maiden Lane Series, Deb Marlowe’s The Love List. Maire Claremont’s newest Lady in Red is on my to be read list and I can’t wait to start it.

I imagine releasing your first book as an exciting, nervous and somewhat scary experience.  How was it for you?  Did you do anything special to celebrate?

Nerve-wracking, basically. The day of uploads as I’m calling it was Friday, December 6th and I had a doctor’s appointment that morning bright and early so I was running on little sleep. (In comparison to my normal amount, as I love to sleep!) I think that helped me to freak out less, as I was too exhausted to think beyond pushing the buttons and reading directions. I did go out for breakfast the next day with my husband, but other than that I’ve been celebrating by relaxing and watching the X-Files.

Speaking of celebrations, December is a month filled with them.  What Christmas, New Year’s or other holiday traditions are you looking forward to this month?

I’m not a very festive person per se, but I do enjoy going around and looking at large Christmas light displays. I also like getting to see family I wouldn’t normally see.

I started my Christmas baking today so my thoughts are filled with the yummy tastes and smells of my favorite candies and cookies.  What’s your favorite holiday treat?  Do you have a recipe to share with us?

I really love cookies and other holiday goodies. I am gluten free, so have to make a lot of my own stuff. However, the thing is I’m just starting in baking after years and years of relying on my husband—as he was a professional chef before he got into computers. I use Pamela’s Gluten Free Pancake and Baking Mix as the start to so many recipes as it’s easy to work with. It adapts for bread, cookies, and even gravy.

I’m working on the novella that bridges between books 1 and 2 of the Rookery Rogues. It’s tentatively called Secrets in Scarlet and features Thaddeus Knight (the Metropolitan Police Officer introduced in ADI) and Daniel’s sister, Poppy O’Reilly.

Thanks so much for visiting with us today.  Is there anything you’d like to ask our readers?

Tell me your favorite romance for a chance to win an e-copy of A Dangerous Invitation! 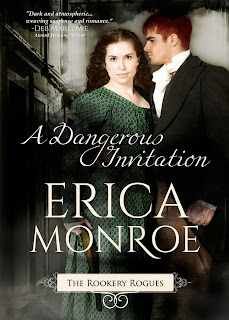 One fatal mistake cost Daniel O’Reilly the woman he loved, spiraling him toward drunken self-destruction. Now sober, he’ll have to prove he’s innocent of the murder he was accused of three years ago. But pistol-wielding Kate Morgan hasn’t forgiven his sins.
Torn from her privileged existence by her father’s death, Kate Morgan has carved out a new independent life in the Ratcliffe rookery as a fence for stolen goods. Daniel’s invitation to assist him jeopardizes her structured existence. Yet Kate can’t resist his touch, or the wicked desires he stirs within her.

As their renewed passions grow reckless, their investigation takes them through the darkest and most depraved areas of the City. To catch a killer, they’ll have to put secrets behind them and trust only their hearts.