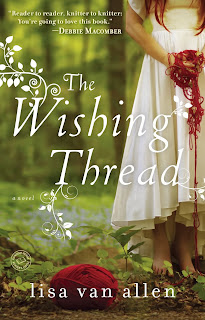 We're delighted to host Lisa Van Allen at the Romance Dish today. Holding a BA from McDaniel College and a MFA from Fairleigh Dickinson University, Lisa has been published in numerous magazines and literary journals.  She has also been a nominee for the Pushcart Prize, a literary prize that honors the best in poetry, essays, short fiction, etc. that is published by small presses.  Lisa's first novel, The Wishing Thread was published by Random House (Ballantine) in September.

Please give Lisa a warm welcome!

The Wishing Thread: Magic, Knitting, and Love in Sleepy Hollow!

I started knitting in 2001, and whenever I make a gift for someone, I always send a few good wishes and prayers in hopes that some good energy will make it to the recipient. I knit for friends who are hurting and need a pick me up. I knit for babies in a local inner-city hospital. In a way, all hand-made gifts—from baby blankets to holiday dinners—are like wishes for blessings.
So you can guess it wasn’t a far jump from there to, “Wouldn’t it be cool if a person could knit a magic spell?”

That’s how The Wishing Thread was born.

Each sister has her own feelings about the magical traditions that have come down through the ages, going back to the Revolutionary War. The “magic” isn’t easy or straightforward. In order for a spell to work, a person must be willing to give up something that’s as good as what she’ll receive if the spell works. And that means the “magic” is not a sure bet. In fact, some people say it isn’t magic at all. Others swear by it.

The main character, Aubrey, is a soft-spoken librarian who is regularly the victim of speculation and gossip on account of her “magical” knitting and her excessively blue eyes. Some people give her a wide berth. But the new guy in the neighborhood, a carpenter named Vic, isn’t afraid of what people say about her so much as he is intrigued.

The problem is that Aubrey has no time to even think about romance: her aunt has just passed away, breaking tradition by leaving The Stitchery to all three Van Ripper sisters instead of just leaving it to Aubrey alone. And now, her sisters are back—and whether they like it or not, they’ve got to find a way to come together and agree on what to do with The Stitchery.

What would you give up to save your family’s legacy, your sisters, or your whole town? What would you be willing to sacrifice in the name of a magic spell?

I hope this book will speak to any woman who knows the magic of giving or receiving gifts made with heart.

I’m wishing you all happy holidays!

P.S. If you knit or crochet, find me on www.Ravelry.com as “lisava”! Also, find me on Facebook! Let’s chat!
Posted by pjpuppymom at 12:00 AM