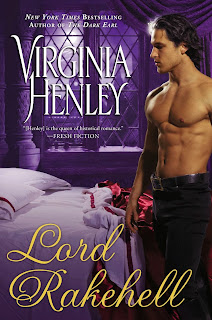 I once said some people write with a quill, others with a sharpie.

What I meant was that some authors are subtle and quiet in their crafting of words while others are bold and sweeping.    There was no judgment in my statement—both have their time and place—but that specific place must be considered to guarantee the best read.

Lady Anne Curzon-Howe has been in love with Lord James Hamilton ever since she was young.    While some time has passed since she’s last seen him—time in which she’s grown into quite the unrecognizable, gorgeous young woman—she decides to have an “intrigue” when next they meet, particularly since James doesn’t seem to know who she is and now cannot take his eyes off her.    Not revealing her true name, she lets him assume she is another man’s mistress, which allows time and license for some bold flirtation with a man she’s always adored.

With a reputation so sordid he’s earned the nickname “Lord Rakehell,” Lord James Hamilton, attendant to Queen Victoria’s heir, will do everything he can to avoid the trappings of marriage.   But while James is showing the young prince the ropes of what it truly means to be a rake, he meets a beauty beyond compare, a beauty he’s hoping to make his mistress.   What James does not know, however, is that the beauty is a lady who will never agree to be anything less than a wife.

The thing about the Victorian era is that it is a time period rife with so many social constraints it is difficult for the hero and heroine to express themselves to each other without some restraint.  It takes a subtle author-hand to navigate around those social constraints in such a way as to use them to wind the sexual tension as tautly as possible.   It is a time period where a simple look or touch serves as the most potent form of foreplay.

In Henley's Victorian era, however, all the bawdy conversations I'm so used to and adored in her medieval romances, are still there.   And yet, I can’t quite get over the fact Queen Victoria herself is secondary character in a book where conversations occur between men and women in which the size of a particular part of a male’s anatomy is discussed openly.  And while I've always appreciated Henley's brand of bawdy, her voice in the Victorian era feels much to me as though she put on shoes that simply don't fit her.

That said, if you have enjoyed a Henley book in the past, you might want to try Lord Rakehell.   You WILL get a Henley romance and you may count on a detailed picture of the historical events of the time.