Guest Review - - No Place for a Dame 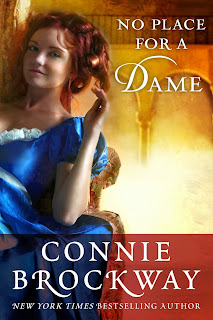 The thing I adore about a Connie Brockway book is the guaranteed surprise I’m sure to find in every single one of them.   Whether it’s a twist of phrase, a word choice, a quirky character, or an unusual plot development, Brockway never fails to give me this gift.

What’s more, she draws her readers in with a particularly polished skill I like to call “the vulnerability of character” lure—a vulnerability that is so relatable, so fragile, yet both tragic and humorous, I can’t get out of her books until I’ve scarfed the pages down in one sitting.

No Place for a Dame is no exception.

Avery Quinn, beautiful and brilliant but of no standing in society, has a deal to propose to her late guardian’s handsome heir, Giles, Lord Strand:  she will save him from a disastrous marriage if he promises to present her to the Royal Astronomical Society.

And he must present her dressed as a boy since the Astronomical Society only includes male members.

And, actually, she proposes this deal after she saves Giles from said disastrous engagement.   Hopefully he’ll accept (and hopefully he didn’t want to marry his pea-brained fiancée in the first place).

Giles has always had a thing for redheads so when his late father’s beautiful crimson-haired ward tells him of her ridiculous scheme he has trouble refusing her.   But then again, he’s always had trouble refusing her.   And, perhaps, it was Avery who first introduced him to his penchant for redheads.   Meanwhile, he’ll strive to ignore her while he looks for a missing colleague.   And how hard will ignoring her be?  She’ll be dressed as a man and he has more important things to attend to.

With biting repartee and moments that had me both cackling and sighing, Brockway has paid worthy homage to a favorite character first introduced some 15 years ago in her beloved novel, All Through the Night.

And if my review hasn’t convinced you to buy No Place for a Dame
immediately, perhaps these two paragraphs will—found within the first 15 pages, no less:

The morning sun had burnished his golden head as he rode up the lane, lithe and graceful, his face alive with the pleasure of homecoming, his gaze traveling with pride over Killylea’s ancient façade.  He must have felt her gaze for he’d looked up and spotted her.   She’d frozen, red-faced at having been caught spying, and scowled down at him because she hated feeling awkward.  Then he’d compounded the injury by winking at her.  Winking.

It had been Avery’s first experience with masculine charm and it proved a disconcerting one.  She could not explain it—it was ineluctable, mysterious, and confusing—and even at such a tender age she had distrusted anything she could not explain.  It also irritated her.  He wore the unassailable certainty of his own consequence with as little self-consciousness as another man wears shoes and used his magnetism as easily as another breathed, and she’d despised herself for falling prey to it after just one wink just like everyone else, because she was not like everyone else.

As I said.   “The vulnerability of character” lure!