This Spinster Is Special! 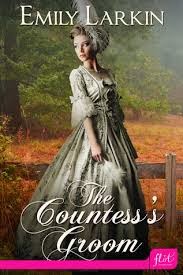 Hey, it's Christmas Eve! Not only that, it's my last review for the year. Thank you so much to all of you who have swung by to share your thoughts and recommendations. My TBR pile thanks you. My VISA card, not so much! ;-) Seriously, thanks to the Dishies and all their regulars. I always love popping by here each month to discuss a great book or two.

I'd like to finish the year's reviews of some really great books with two more that may have passed under your radar.

Emily Larkin is a talented writer from New Zealand who has written romantic fantasy as Emily Gee and historical romance as Emily May. Her first book THE THIEF WITH NO SHADOW was nominated for two RITAs in 2008. I first read one of her books when I agreed to quote for THE UNMASKING OF A LADY, a fantastic historical romance with elements of OLIVER TWIST and Cinderella. I wasn't at all surprised when it was a finalist in the Australian Romantic Book of the Year awards in 2011. Since then, I've read pretty much everything Emily has written.

19-year-old Rose Quayle, Countess of Malmstoke, has been forced into a cruel marriage with a violent man. She's like a wounded and frightened animal when she meets Will Fenmore, a groom on her husband's estate Creed Hall. Will is a lovely character - seriously, lovely! He's a man of few words, kind, perceptive, gentle, and head over heels in love with Rose. But of course in 1762 England, a groom in love with a lady has no hope of happiness.

Well, unless the groom and the lady are brave and resourceful and willing to take some terrible risks.

Rose gradually falls under Will's spell to a point where she becomes his lover (the love scenes in this story are beautifully tender). She details her sensual awakening in a diary that she hides in a secret cupboard in her bedroom.

I really enjoyed this story about a woman emerging from a nightmare to seize her chance at happiness. And as you've probably gathered, the hero is a darling! 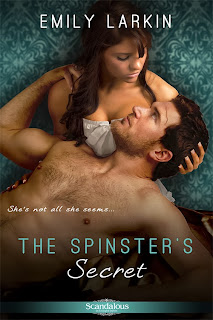 While it's not necessary to read Rose and Will's story before you start THE SPINSTER'S SECRET, it makes a nice appetizer for the main course.

Matilda (Mattie) Chapple is the kind of heroine I love in a Regency romance.The impoverished, intelligent, frustrated woman of no spectacular beauty who struggles to find a place for herself and her talents in a world hostile to female independence. Jane Austen was just such a woman - there are some lovely PRIDE AND PREJUDICE parallels in this story to give Austen fans a nice smile.

Mattie lives at grim Creed Hall, the setting for THE COUNTESS'S GROOM, as an unvalued poor relation with her miserly uncle, Sir Arthur Strickland; her self-centered aunt; and her aunt's impoverished companion. Mattie is a woman of courage and initiative with a dream for breaking free from her dull, restrictive existence. To finance her plan to open a boarding house, she's writing a series of 'confessions', penned by the supposed courtesan Cherie. The confessions have taken London by storm and everyone is agog to discover the author's identity.

So that's the spinster's secret - she writes dirty books!

As a virgin, Mattie has no personal experience of the encounters in her stories, but she has the erotic bestseller FANNY HILL and the mysterious diary she's discovered in a hidden cabinet in her bedroom to help her. If her moralistic and judgmental uncle discovers what she's up to, she'll be out on her ear. Also - and I liked this element of Mattie's character - she's conscious that while her uncle has never been generous, he has kept her from starving all these years. She doesn't want to hurt him with a scandal. So our spinster has many reasons to hide her activities.

Enter our hero, Edward Kane, who has returned physically and mentally scarred from his horrific experiences at Waterloo, at battle at which Mattie's beloved cousin Toby Strickland was killed. Toby was Edward's best friend, so he's calling on the family to deliver his condolences personally. Edward is eaten up with guilt because Toby died saving his life, so when Sir Arthur discovers that the notorious Cherie lives locally, Edward promises to expose the pornographer.

Of course the last person he suspects of being Cherie is plain, downtrodden Miss Chapple.

Edward is trapped with the awful food and nightly sermons at Creed Hall until he can fulfill his promise to his host. And as time goes on, plain Miss Chapple becomes increasingly intriguing and not plain at all.

But what happens when Edward discovers very personal details of his affair with Mattie appearing in Cherie's confessions? The feathers start flying!

There is so much that I love about this story. I love the secondary characters. Even grumpy old Sir Arthur is three-dimensional. I particularly love Mattie and Edward. Neither of them has had an easy path through life. When they meet, both are so wary, that it takes them a long time to realize they've found their soulmate. I love the setting with its atmospheric gothic touches. I love the wry humor and deep emotion. I love how Emily uses such rich and evocative Regency detail to create this story about finding love where you least expect it. I REALLY love the first love scene which is sweet and awkward and passionate.

So if you're looking for something lovely to read this Holiday Season, why not pick up THE SPINSTER'S SECRET? I bet you love it just as much as I do!

The love scene in THE SPINSTER'S SECRET really is beautifully done. Let's be naughty this Christmas Eve. What's the best love scene you've read recently? Maybe we can forward the details to Mattie for her saucy books!

PJ here.  Thanks, Anna! These stories sound so yummy!  We're giving away kindle copies of both books to one person who leaves a comment.  Deadline for comments is December 26, 2013.  Merry Christmas and good luck!
Posted by Anna Campbell at 12:00 AM