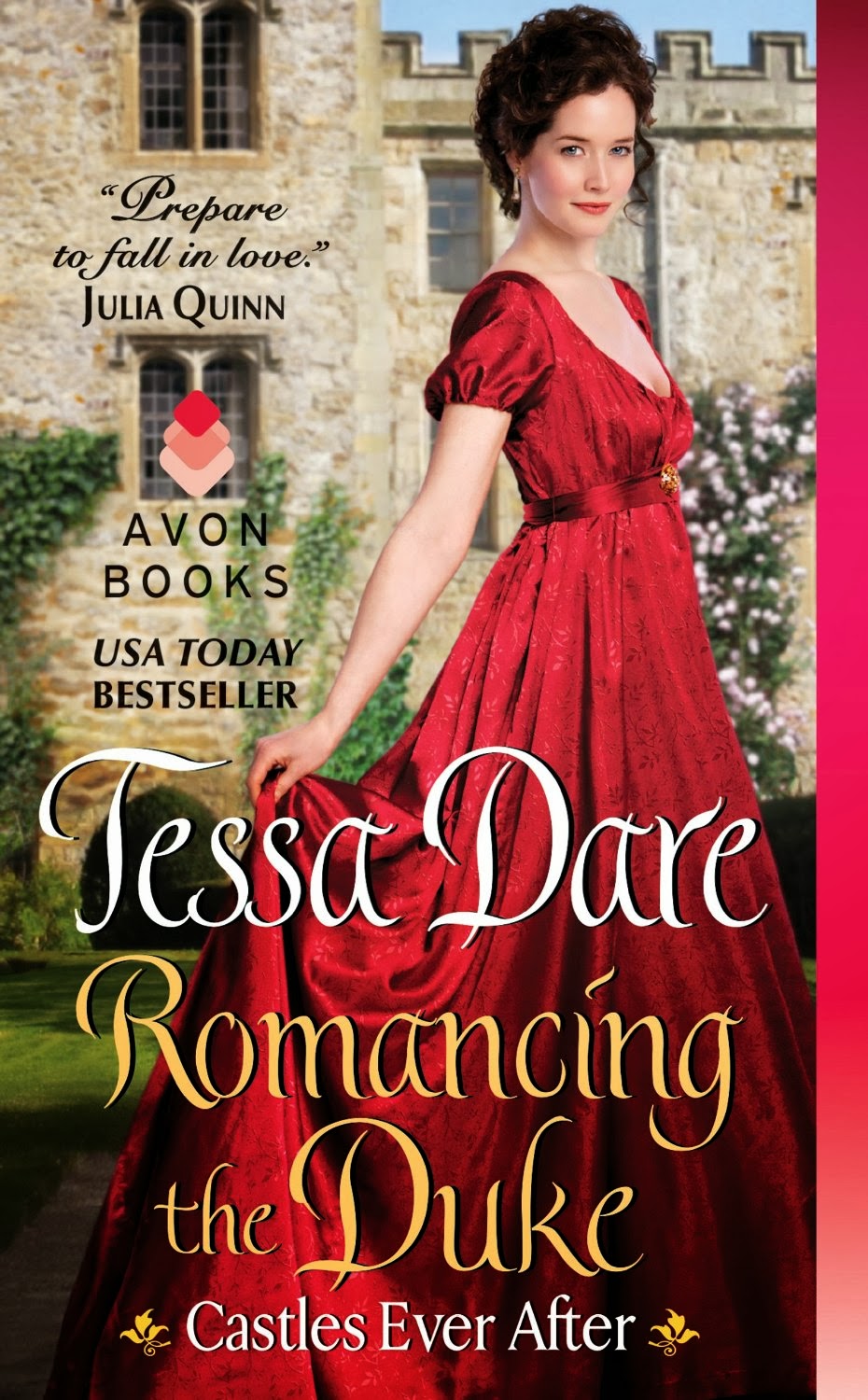 It is a truth universally acknowledged that if one is writing a historical romance, one must have a heroine to root for, a hero to swoon for, and enough of something that is wholly the writer’s to let the reader know this story may have a happy ending, but that’s the only predictability you’re going to have. Tessa Dare’s Romancing the Duke not only meets these expectations, but exceeds them.

Izzy Goodnight, penniless spinster-orphan, has inherited a castle that is currently occupied by the Duke of Rothbury, a charming man who makes the cherished fairy-tale Beast look like a diplomat. Of course, the Duke didn’t sell his castle, so he’s flummoxed how it could possibly have been inherited by Miss Goodnight, even if she’s now holding the title in her hand and there are a bunch of impressive signatures and seals all over it. They work out a truce of sorts. In exchange for some money (she is penniless and renovating this castle will not be cheap), she will be his secretary as they unravel the mounds of letters that have accumulated over the last several months while the Duke has been convalescing.

Now all of that sounds completely normal, right? We’ve read and loved that story before—the poor penniless heroine who finally has caught a break, almost, but now has to deal with this big, handsome, intimidating man who frequently behaves as if he doesn’t know if he wants to break furniture or ravish her. But Ms. Dare is not satisfied with normal; and she’s really quite brilliant at adding “writer jokes” that translate wonderfully to the reader. One of those “Do Nots” of writing is “just because it’s funny to you as a writer doesn’t mean the audience will think so.” But Ms. Dare is very much able to have her cake and eat it too. And you’ll be having it and eating it too as you meet the Moranglian society, wonder who the real Izzy Goodnight really is, and gasp as you realize you’ve been Jedi’d in a 19th century England setting.

To those readers who want strictly drama and romance and turmoil, they will probably pick at things in this book. The dialogue is probably not perfectly proper for the period, let alone how some of the different classes of people behave. It’s a Romp of the capital R order, but all the humorous bits didn’t take away from the darker emotional bits of the romance. He was still a duke who had never been loved; she was a penniless orphan who was beloved by everyone. They had their own baggage to sift through; they both brought what the other needed. I was thoroughly satisfied in its ending.

I would give much more specific examples and quotations from the book, but that would ruin the surprise that much of the humor gives. And believe me, I want to quote plenty from this book. Let’s meet back in a week or so and pass our favorite scenes back and forth, shall we? Or if you’ve already read it and can refer to a scene without giving everything away—do share!